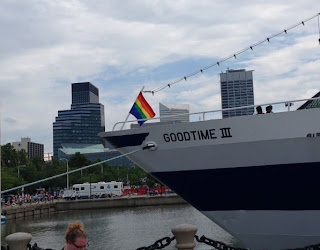 You know - I just don't know what to think of Pride.

Yes, I've been down this road with you folks before, and here we are again now and potentially again in the future.

While this could be about any Pride event, I'll try to focus on the Cleveland one, as I haven't been to  any other cities pride in years.

We did not attend last year, but did go two ago, right after New York legalized same-sex marriage.

With the DOMA and Prop 8 rulings just days ago, it was good to make an appearance (since I'm sure everyone was clamouring to see me!) this year.

No one clamoured. At least not for me. Can you imagine??? Though on the way out, a young-ish lesbian came up to ask me where I got my mountain bike t-shirt. She thought it was cool.

Yes, I didn't dress in rainbow anything.  I'm not a rainbow kind of guy. Or sunshine or lollipops.

It's not that I'm not proud to be gay - or even a Clevelander.  It's just that it seems we can't get it together in a combined regard.  Let's just say I'm underwhelmed.

It's not that I don't think people should be or act how they are.  I don't care about Dykes on Bikes. I don't care if there are drag queens and go-go boys, but won't say I truly get / understand that either.  I truly don't understand gay Republicans - but that's another post all together (....insert Airplane line here....)

I do get that those folks are much more colourful than say....I am.  That is what the media latches on to, and I get that. It's about ratings more than news.  Assuming there is media at all.

Perhaps there will be this year, just due to the SCOTUS rulings.  There is certainly no pre-parade news about.   Fuck, there is barely any information on the Cleveland Pride website - and it is certainly not easily found.

Eventually, I dug hard and deep enough to find some info....under the 'welcome letter'.....for volunteers and participants. If you're looking just to view the parade, you have to really want that info.  Even in that letter, it talks about gathering time and places, but no step-off time.

Is it any wonder that no one goes to see the Cleveland parade?  In Columbus, I saw pictures of people 6-7-8 deep for miles.  I'd be surprised if even protesters came out to yell in Cleveland, as it took too much effort to even know we were having it, let alone when.

Again, I don't know how other cities operate their parades. I am more than a little suspect when the CEO of Cleveland Pride is also the biggest sponsor: the local bath house.

While I'm hardly one to judge, but we've put an event that was started to recognize the anniversary of Stonewall to a man who'll give you one towel, all the condoms you want and a buffet at 04:00....at least on Friday and Saturday nights.

On another note:  I spotted a man named Howard O.  My friend Jon and I used to work with him back in 1985.  Well for me it was a little earlier.  How I recognized Howard after 2+ decades is beyond me, but I did.

No, I didn't go out of my way to say "hello"....or any such thing.  I just planned my escape route - that was easier.

The irony?  The one thing I wanted to at Pride was to sign a petition to get marriage equality on the Ohio ballot.  Howard O was carrying that petition.  The price was too high.  I'm not proud.

....and Cleveland gays are smoking bunch.  Not smoking hot.  Just they certainly like to smoke - a lot! It's possible 710 and I were one of the few not doing that.

Email ThisBlogThis!Share to TwitterShare to FacebookShare to Pinterest
Labels: Gay

Come on, baby, let the Goodtimes roll. (Someone had to say it.)

You should come to a NW Arkansas Pride parade. Oh wait, I don't even go.