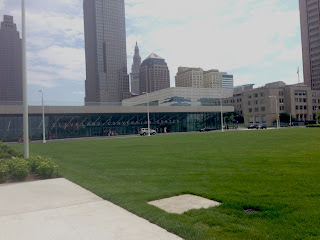 Our "rock star" event was to go see the new Cleveland Convention Center.

Yeah, I can kind of see David's point.

Cleveland has never been a convention town. Our weather isn't always optimal to have people and corporations clamouring to traipse around town in February.   ....and by "February", I mean November through April.

Also, our former, unusable convention center was outdated back in 1932.  I'm estimating.

Allegedly, we didn't get the Republican Convention because of the space - and lack of downtown hotel rooms.  That is changing as one hotel is being majorly rehabbed, another old building will be renovated into a luxury hotel and then a brand spankin' new one.

What you see in the title image is the entrance.  Heading south through the doors is the big open area (down a flight of stairs, that is) where any vendor fair would be. All the meeting rooms?  They are under that grassy space.

Yes, the majority of the convention center is underground.

At first you can think of that being a bit disconcerting until you think of any tomb of a convention center you've been in.  Except for the entrance, there is no natural light in most any of them.  Oddly enough, this does.  At the end of that green space, closer to where I'm taking they put in floor to ceiling windows that over look train tracks, the Rock and Roll Hall of Fame and Lake Erie - bringing in tons of natural light.  I didn't think enough to take a pic of that.

I DID take a panoramic view from the adjoining Medical Mart Global Center for Health Innovation of part of downtown Cleveland.

After we toured this, then we had dinner with the man who designed the tall federal building on the far left.   Oh, and I got drunk. Way drunk.  ...but that's another story.

Song by:  Lindsey Buckingham
Posted by Blobby at 12:18 AM

An underground convention center is no big deal. The one here in San Diego is on the waterfront, has windows only in the lobby and those windows face away from the ocean. Um, what???

It doesn't stop geeks from selling out San Diego ComicCon a year early, though.

Convention centers make me drink too. I think it's a by-product of being trapped in several of them for three week stretches several times a year back in the day.