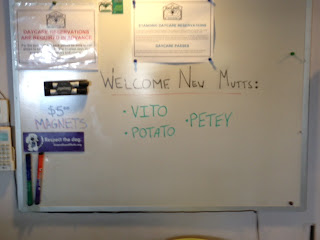 I will try to write this without too much emotion.  But I am an angry angry man.  Always have been, always will be.

With vacation looming (not a looming vacation) we are in need to board Petey somewhere.

Last year, we had only had him for two weeks before our scheduled time away, so he stayed at his normal facility, which was not convenient to us. So I've been looking around for places.

Right now I'm 0 for 1 - though I think the Mutt Hutt are the losers.  ...and yeah, I'm calling them out, if they ever fucking Gooooogle themselves.

I picked the Hutt because they have a cage-free environment...and they have staff 24/7/365.  Not all kennels have someone there at night.  Petey is good in a crate, but he doesn't need one, and doesn't use one. He's non-aggressive. He's a good boy.

Petey had to have a full-day evaluation, which I could deal with. He's never been away from us all day, except when he was getting his IVs last fall.  The Hutt wanted to know everything about him, via paperwork before eval day and I provided and was honest.

He's 11, he has allergies, he tried to bite one person one time (and they were throwing rocks at him) years ago. I also told them about his pneumonia.  They wanted medical, vaccination and neutering records, emergency contacts, types of food he ate - you name it.  I tell you this because it is important (to me) later.

I'm there to drop him off 15 minutes early. He wasn't thrilled to be there, but it was not horrible. All the other doggies coming in for boarding or daycare were very excited to be there, so I took it as a good sign.  As you can see, Vito and Potato were also being evaluated that day.  Semi-important for later on.

Potato.  Who names their dog Potato?  Everyone I showed the picture to just laughed, but deep down thought it was kind of cute - present company included.

I got a scheduled update call around 12:30 saying all was well.  Petey was being a "loner" and just hanging out and sleeping a lot.  He's 11 and I told them he got along with other dogs but was bored with them easily - so they knew this at my initial call, in the paperwork and when I dropped him off.  There were no surprises with this info.  Still, the guy thought he was fine and no issues moving forward.

Anyhoo - you could not pick up new evals until 17:00.  I had separation anxiety so I was there at 17:00.  Vito and Potato were already erased from the board as being gone.  So much for the 'cannot pick them up before 5p" bullshit.

Oh, and I was told they only take two new dogs at a time for eval, so someone can't count, since there were three.

So a different guy comes out while they get Pete to tell me our dog is not a good candidate for the Hutt.

I felt like the Helicopter Parent who was just told my son should start looking at  DeVry because Ivy League just wasn't gonna happen.

"This is a high energy place, a lot of young dogs....he just doesn't fit in...."   Um...he's low maintenance.  He plays a little then sleeps.  He wasn't aggressive, he doesn't bark.  What do you want?  He's the perfect dog you don't have to worry about.

"We're worried about the pneumonia".   ....from 8 months ago?  It wasn't from Kennel Cough, we established that.

Daycare and boarding are your business.  And during phone screen, I told you the boarding plan. If that's not your model, why not tell me then?

I have to believe there is something underlying they won't say.  Maybe because I said I wasn't looking for daycare, but just boarding?  Did they only want the sustainable income that working dads have and not just that once in a while kind of business model?

I had to give you all his vitals from birth up to today and you can't be sure if he ate or went the fucking bathroom?  You were evaluating him - correct???  An evaluation I paid for, at that!

I left there dejected - and on the drive home, pissed.  I haven't the heart to tell Petey he's been ostracized.

And the killer?   You just know damned well that Potato got in.  Vito too, but mostly because of his mob connections.

Yesterday morning, as I watched Petey stack his beds.... 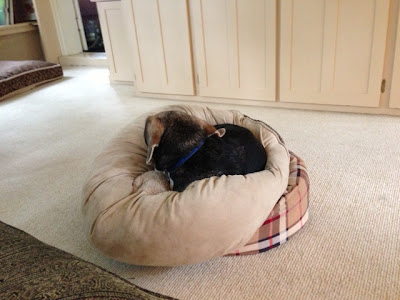 I sent the pic to 710 and he said, "the Mutt Hutt would never allow him to do that".  Yes, I'm sure. He's too subversive for their kind.

So, now I will have to either see if we can get him in at the Barkley, Camp BowWow or unfortunately, back to the place we had him at last year.

Personally, I'd rather have a house-sitter, but I don't know anyone well enough to trust that action.

Woe is me.  Back to the drawing board - not that we have much time.

asshats! and lazy ones at that! petey is too good for them.

I am sorry. That totally sucks and the idiot who worked there should get his ass kicked for being a douche bag.

Oh jeez! Anyone with a heart, not to say intelligence, would move heaven and earth to welcome dear little Petey. Hope he's not feeling TOO dejected.

We went through the same crap with "pet hotels" - they are either awful, nasty places or they require so much documentation that it's hardly worth it.

On the other hand, have had great luck with pet sitters. In two different cities we found amazing people on Craiglist who would come over 3 times a day to walk, play, etc. Felt good knowing that our dogs were still comfortably in their home.

The good ones have enough references that you can trust them in your home. Think about it!

Just for fun, find a lawyer and sue them for age discrimination. Older dogs seem to get the same bad rap older peoples do....

If you lived here I'd pet sit Petey and I'd bring along my beagle and Chihuahua for some group napping.

I wish you were near me. I have a grooming and small boarding facility and I cater to dogs just like him. Cage free and nothing bigger than him of say a cocker. The older and drowsier the better :)

Ugh. Sorry your dog didn't get in. That sucks royally.

ouch. this hurts.
I would be angry too.
I too smell a rat something is behind this. but good riddance.