Oh, so today is Father's Day.

At least in Cleveland and Columbus, it always interfered coincided with Pride Weekend.  Even the two cities would be back to back days - Saturday and Sunday respectively.

It is rare anyone shows up to watch the Cleveland parade.  I have no idea how many people march.  Everyone seems to be at the beer garden at the end of the route.  Columbus never seemed to have many folks watching, but always had a decent group marching, including myself, back in the day.

2013 has everything all discombobulated.  Columbus Pride is next Saturday (the 22nd) and Cleveland is the week after that.  I don't think it will draw anymore people to each other's town, but what do I know?

What I do know is Father's Day is left unobstructed.  No skipping one event for the other - not that I was really planning on going to Pride.

Don't judge, I've been pretty clear the last few times I went that anymore it is about the beer and vendor fair than it has anything to do with being proud to be gay.  It turns out I can buy beer anytime I want.

I only have one father and well, you know time is limited.  He is 92.5 years old. Regardless of how healthy he is, I'm not getting too many more of these.  I don't mean to be callous, it's just a reality one must face.

But due to inclement weather, my mother opted to have Father's Day a day early.  Possibly for convenience, but also, my brothers-in-law (or is it brother in laws?) can have their day on the actual day. Who knows?  A day won't make a difference.  As it turned out she changed it back to the actual day because she "forgot" she had an engagement on Saturday.

But in every Sunday's comics also contains the MiniPage. Below is from last Sunday. 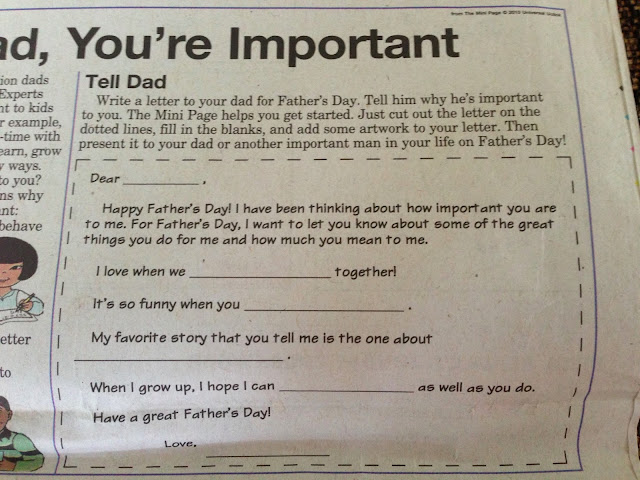 Oh, I totally expect you all to be dirty about this.

But first off, since it is for kids, I do love how they left it as "Dear (blank)".

I think "Dad" would be appropriate to have just filled in automatically.  I get that there are blended families, and these are are kids, but they're not saying "dear dirtbag stepdad", are they?  They are also rarely saying "Fred", "Hank" or "Jacques".

However, the Salutation leaves you just one more part of this MadLib for you to complete, depending on how you feel about your father figure.

I'm always thinking of you. The truth is, he was too - or he wouldn't have bothered to read it to me. He knew what I'd do with this kind of item.

Song by: Everclear
Posted by Blobby at 12:13 AM

hurl insults at one another

be an overbearing patriarch

Your "no-good, blacksheep, should have been aborted" son