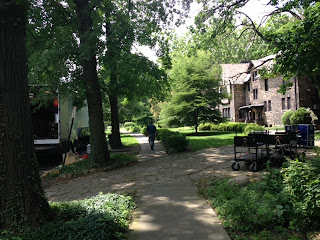 So we get a notice in the 'hood about some inconveniences to traffic for this upcoming week.

The powers that be are using part of one street to film a movie called Freezer Burn, and residents were told there'd be semis, tractor-trailers, Suburbans (how...um..specific) and such on the streets, though nothing would be officially blocked and traffic would still flow as normal.

Being all Edward Snowden about it, I quickly Goooooogle searched "Freezer Burn movie" only to find it is the production title for the new Captain America movie - The Winter Soldier.

This is different than that Kevin Costner movie that I said was shooting here a few weeks ago.

Captain America 2 has been filming in Cleveland for over a month now.  Much to the dismay of the citizens of our fair city - the production team was allowed to close down major roads for two week stretches - doubling some people's commutes !!!!!!

Mind you - a commute in Cleveland is not like one in Chicago, New York or Los Angeles.  My commute downtown used to take seven minutes.

Granted, I don't have to drive that route of the movie, but it is a small price to pay (two weeks!) to get some much needed income and exposure to what some call the Mistake on the Lake.

We are a tough, resilient city, unless said driver can't get to their Starbucks by 07:42 promptly - then we are just fucking whiny babies.

Of course, they forgot 2-3 years ago when the Avengers (the third highest grossing movie of all time) was filmed downtown and closed one major street for a while. I have no idea how much money it brought to the city in fees, but also hotels, food, etc.  Yet it was fun to watch the movie to see the city that was to be New York.

Captain America, will be set in Washington DC, but it seems that town was unwilling to shutdown a major freeway for two weeks.

I'm not one to really go out of my way to go see the filming of these movies. Chris Evans is ok to look at but he was more appealing in Another Teen Movie than he is in something like this.  Oh, and I'm not a comic book guy.

One of my sisters wanted to take her son to see filming but opted not to come to our house, since I didn't know the exact shooting schedule and if she'd see any "stars".  Whatever.   Am I the personal assistant to the directors?  Am I to be privy to all the detailed information on the shoot?  Apparently someone thought I should.

Going downtown at anytime from a 6a-2a shooting schedule isn't really going to provide a guarantee.  But at least I provided parking, yet they're going downtown.

I did get a "complaint" by a neighbor regarding if we had a say and if the movie had any appeal to the neighborhood and what compensation we'd be getting for the inconvenience.

Goooogle it like everyone else in the 'hood did.  Appeal is relative.  And no - you're not getting a dime, and you don't even live on the street where it's being filmed.  Get. A. Grip.

As it turns out, it looks like they're using one of the more interesting houses in the place to film exterior shots.  The owner, who is only in his early 60s has lived in the house for 50+ years. It's a grand old castle-like structure, so I'm sure they'll get good shots.  As far as I can tell, there are no "stars", but I'm not keeping a close eye on the matter.  Maybe Scarlet Johannsen will be there.  Maybe not.  Don't care.

Petey and I walked by just to see what was what, but all you saw were cables going into the house. Though the teamsters offered Petey a bottle of water, as he was panting - what was really nice.

Glad they didn't try to make him a star.  The pooch is spoiled and stubborn enough without that kind of hassle. I'd never hear the end of it.

We've been getting more and more of this in Atlanta too. Since it's good for the local economy, I try to think of the inconvenience like I do road construction. Monday I had to take a detour on the way to work, and occasionally I have a hard time getting out of my condo when "Drop Dead Diva" is filming across the street. (Never seen it.) But when they closed down my neighborhood pub for several days (to film "The Change Up", yawn) I got a little cranky. On the last day of filming, my friend who manages the bar let me in to drink. No filming or extra work, just the film crew cleaning up. I was disappointed I didn't get to drink with Ryan Reynolds.