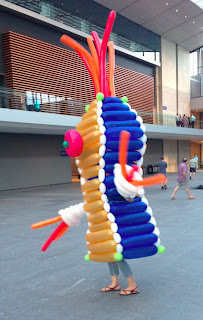 To continue on with the beginning of summer celebration, Saturday 710 and I went to, what is now, an annual event at the Cleveland Museum of Art:  Summer Solstice.

What started off five years or so ago as a party of music and art at the museum, now has two separate entrance times and a total of 5,000 attendees.

Since this was our first go-round, we'll assume the older farts opted for the 20:00 time and the youths went for the cheaper (half priced) 22:30 time - you know when night life just gets going for them.

Long ago, I was one of those youths - one who never thought about going out before 23:30.  Now that's an hour past my bed time.

So yes, I am one of those old(er) farts.

I'll also assume that a bigger gay faction came at 22:30, but who knows.  I saw some gay men of our age, but they fall in with the older fart crowd - like us.

I didn't know what to expect, actually.  We weren't casual, but we weren't dressed up.  Yet some were there in seersucker and bow ties. Another guy had a cut off Puma t-shirt and workout shorts, and then there was everything in between.

Food and drink were reasonably cheap (and the the food was better than good!!!).

But the set-up is this:  a few DJs (including one I even heard of (!) Afrika Bambaataa), live bands outdoors - all of whom were great and great to listen to (not that I'd ever probably buy their music to play in my car, but it was great as live world music), dancing, access to the art museum, including the just opened North Wing, and then all the people viewing you wanted, or could, take in.  Oh, and balloon people. 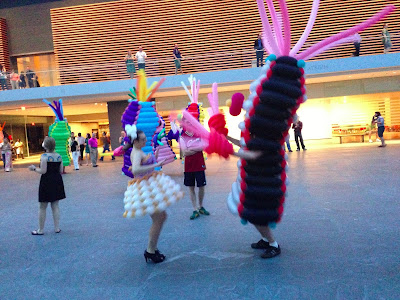 Forget the entire balloon folks, I'm digging this chick's skirt made out of blown-up latex.

Tickets are not cheap - $60 per person for the 20:00 entrance time.  That doesn't cover food, drink or parking. If you were a big eater / drinker, for an additional $50 it was all you could eat / drink. We didn't do that.  I had yoga then next morning.

But we wandered the museum.  We listened to music - one what I would call World Music


One of the other bands had a song called "Brass & Drums", which couldn't have been a huge stretch since the entire band was made up of percussion and brass instruments (which I thought I videoed, but didn't).

We ate.  We drank. I did more people watching than 710, but that is my style.

But for fun, here are some pictures of the evening. 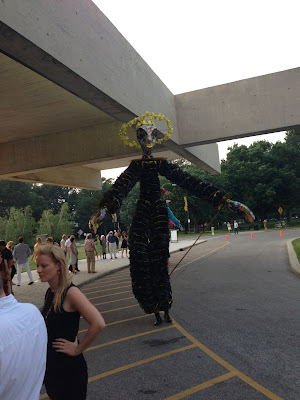 Mummenschanz-like creatures.  Similar to what they have at Parade in the Circle.  Still fun to view. 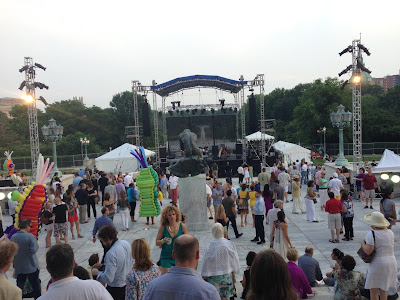 Front of the museum with the stage. 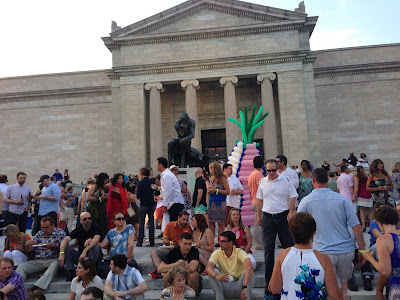 Front of the museum with some early revelers. 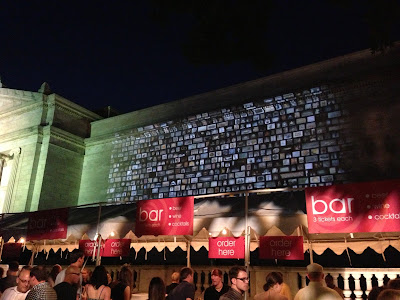 Projecting art on front of the building while the concert is going on.

I think we'll try to go again next year.  We might arrange things differently, but we have a few months to figure that out before tickets go on sale.  Oh - and yes, they sold out in a matter of days.