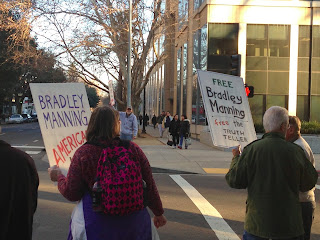 I knew I was hanging onto this image I took a little while ago in Sacramento. I just didn't know when or if I'd ever use it.

I'm a little torn on the entire thing.

On one hand, some of the information the U.S. was holding and using is probably inflammatory to what we do as a nation and why.  This is nothing new during wartime - not that we know when or if we are ever a peace.

Those black and white times are over.

But there are anti-treason laws like this for a reason.  But after the information is taken, should I care that WikiLeaks published it?  The information was already taken, someone was bound to publish some or all of it.

I have a bigger issue with any agency going after Julian Assange and his group.

Yet Manning knew enough not to take the information. Hell, he's pleaded guilty to 10 of his 22 charges already, though he claims his actions didn't 'aid the enemy'.

For every potential wrong-doing the U.S. participated in, there are probably equal legitimate information items not for public consumption.

Does Manning deserve life in prison?  Eh - probably not.  But for what he pled already will get him 10-20 years.

For all of the U.S.Army intelligence out there, Manning allegedly moved documents onto blank CDs he brought in that were marked Lady GaGa, to which he was pretending to listen.  This was during DADT.   If the DoD couldn't  figure out he was gay from that, it is no wonder he got almost three-quarters of a million documents out the door.

For that alone, he should be let go for identifying security gaps. He probably gave them more than any security consultant ever could provide the U.S. Government.

Yet, he should probably still stand trial for listening to Lady GaGa, though that might be against the Geneva Convention for cruel and unusual punishment.

Song by:  Lindsey Buckingham
Posted by Blobby at 12:29 AM