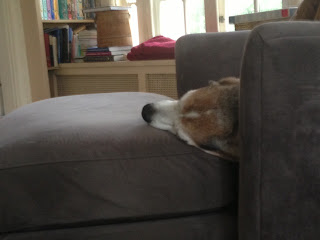 Yes, Petey sleeps bunches.  He likes sleeping.  He's not shy about it.

But the boy is old, he deserves his sleep. And when he's outside - when it's not raining, which has been a lot lately - he's trotting around the yard in search of squirrels, chipmunks and now, wild turkeys.

Yes, we have two wild turkeys who have gone door-to-door in the 'hood.  Yesterday they were in our yard, and on our walk, Petey saw them a few doors down.  He was very interested - as was I. I'm hoping to get good images of them.

It seems lately I don't even try to come up with a meaningful blog post on Friday nights for Saturday morning.  Who gives a crap about government spying on phone and internet data.  This is nothing new.  GWB enacted it years ago and I don't remember anyone stopping those actions while he was in office or afterwards.  And who actually thinks there is privacy on the internet?

Like with the title image, Petey has been liking "his" chair.  Sophie and 710 might argue whose chair it actually belongs, to, but we'll let them figure it out.  He is usually savvy enough to make sure his mouth and nose are on the predetermined blanket. 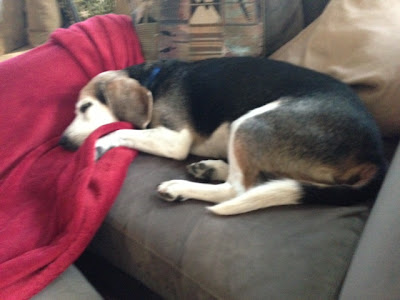 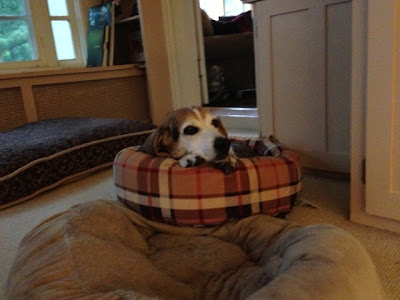 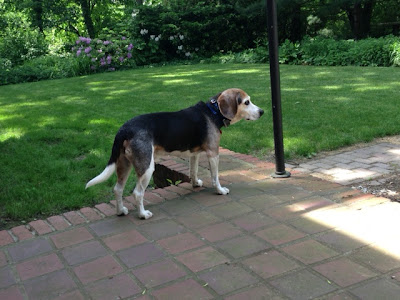 Here he is surveying his domain.  The acre is his - if he so chooses to go out and about, though he usually won't venture too far into the yard.


We have a tour of a different boarding facility for him later today. After my conversation with the new place, I feel pretty good, so I'm hoping things go well.

It actually reminds me a lot of how our dog, Indy, used to act. We would usually get him going by saying "CatSquirrelRabbit!" It would occupy him for a good 20 minutes sometimes. It also usually resulted in the "I want to go outside to investigate the wind" dance. He seems like a great dog!

oh but we love Petey!

Truvy and Tramp are going to be 12 and 13 this year. They sleep more and more deeply - not always hearing me when I get home. They play for shorter lengths of time and less tolerance for younger dogs.

I'm always caught off guard cause it sneaks up on me and catches me when I see other dogs, read about doggies like Petey or am just watching them sleep in my lap. I try not to think about it cause it beaks my heart.

Oh Petey is so cute. He does deserve a lot of sleep especially during this rainy season.