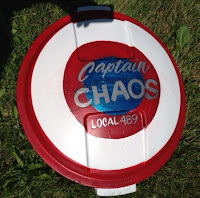 I know I gave a somewhat update on the Freezer Burn Captain America movie that was partially shot in the 'hood.

By partially, I mean one full day was filmed here.  That's it.

For all the potential hubbub, everything seemed pretty tame.  Only two of the stars were allegedly on-site:  Samuel L. Jackson (he's the alleged) and Scarlett Johansson (she was a for sure).  Chris Evans was shooting somewhere else in the city.

Not only that, as predicted, everything was an interior shoot to the house.  Cables and cameras were all dragged inside, leaving very little to be seen out, other than two dozen production assistants, security, food service workers and teamsters.

I did wander the streets a few times, twice with the dog, and once on my own.

On the latter time, there was me and three neighbors watching the "action".  If others had been by, they got bored and left and with good reason - nothing to see.  Not really.

As I approached the house, I saw a woman wandering around in a bathrobe and pajamas. Now, she could have been from the movie or the nursing home down the street - it was hard to say.  But as I stood across the street for a minute, I saw another "older woman" in similar garb come out of the house to the craft services table. 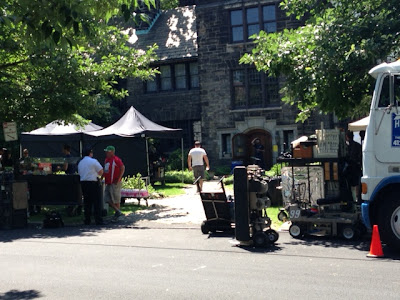 Clearly, it was Johannson.  It was clear to me, but no one else seemed to pay any mind, notice or care about "the old lady".  Until a production assistant shielded her with a black umbrella, so no one could take pictures.  I was too far away for the iPhone to get a good shot anyways.

The production team has been all bothered by people taking pictures where they shouldn't and giving possible spoilers to the film.  One being a kiss between the Black Widow and Capt. America.

Speculation is that the kiss is not real and was staged to throw off anyone who thinks they know about the movie.  Maybe the robe, pjs and old lady wig are too.  Who knows?  Again, I know nothing of either character other than was in the Avengers.  I don't read comics, and if I did, one might have to assume they stick to the comic storyline.

On the second doggie walk though, Petey was the star.

Security stopped me to ask if he could have some brisket.  Stupidly, I agreed.

Like the obedient dog that he rarely is, he trotted over, sat as still as could be, like he was the perfect angel of a dog. And then he got brisket.

And then he got a big head.

Teamsters, like the day before, wanted to pet him.  He was all for that - until he realized they had no food for him - then he treated them like the help.  And getting him off "the set" was a major hassle. There was food to be had and that nose could certainly smell the food trucks and tent.  Getting him 200 yards away was a 30 minute affair.

He's had a taste of stardom.....and it tastes like brisket.

Great closing line! Is this your best Brush With Greatness or have you had a closer experience?