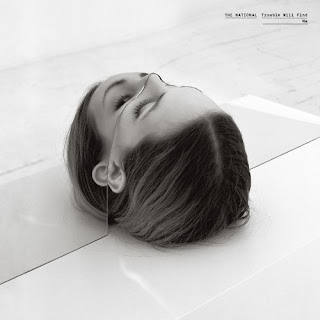 The National's 2010 album, High Violet, made my choice for Record of the Year.  It is still a great album and the songs that were my least favourite (though never bad), "Terrible Love", Vanderlyle Crybaby" are now my go-to songs.

So when the band "surprisingly" announced a few months ago that they had completed a new album, I was stoked.  Yes...I just said "stoked".

I went and pre-ordered Trouble Will Find Me, months before it was released. It got me an immediate download of one of their song, "Demons".  With that song, the album wasn't off to an auspicious start.  You have to get to minute two of a three and one half minute song before there is any kind of melody.

I know that Matt Berninger's baritone can make for challenging lead singer material, but the band has always made it work in the past.  I held off on judgement until listening to the entire disk.

With their previous releases, some of their appeal came from their whimsical rhythm section and the occasional understated horns and strings.  The drumming here is fine, but doesn't have that certain 'catch' that Bryan Devendorf has become known for. That drumming would literally make me smile - even unknowingly at first.  I'm not getting that this go-round.

With Trouble Will Fine Me, they deliver a perfectly serviceable album, but it's nothing outstanding.  I like that they don't try to make it out to be more than it is.

On High Violet or Boxer, any number of songs immediately jumped out as appealing.  There is nothing like that here.  The closest they come is "Humiliation", "Sea of Love"and "Don't Swallow the Cap".

But the songs, overall, are not overly melodic.  That's the best way to describe them. Not that 'melodic' is a great descriptor for the National, but their songs had a certain sing-a-long-able-ness to them.  Not so much with this grouping.

Even for Berninger's baritone, the music is a little monotone too - even more so than usual.  There is little hook and if there is any kind of musical change-up, it comes at least two minutes into the song, and by that time you're losing interest.

Normally I wouldn't read other reviews before finishing mine, but I could not help but seeing the majority of them being 5-star and I wasn't sure what I was missing - so I read.  I'm still not getting 5-star anything with any one song, let alone an overall disk.

I've been playing this album on and off for three weeks now and it is more than fine to listen to while doing other things, but their other disks would make me stop and really listen and replay and replay and replay.  Trouble Will Find Me isn't doing that.

Might be time to consider who is really pimping these record reviews.