This Was the Year

As of yesterday, we have had him a year.  Petey, that is.

I would have posted yesterday, but that Supreme Court thingy kind of ruled over Petey - believe it or not.

Clearly we did, and we haven't looked back.  He's our pride and joy.  Well, Sophie too.

It is actually hard to believe it's been a year. In ways it seems longer, but mostly, it seems like we just got him and are learning his needs, likes, and desires.

I know 365 ago, I said like I felt as though he would never be our dog, and that we'd just be caretakers for my sister's pooch.  That turned out never to be the case, or at least that thought went away early on.

There are posts all over this blog for the last 10 years, about me speaking my love of Petey.  Whether is was a visit to my sisters, getting him out of the kennel for her, or when talking of her other dogs - I would always say he was my favourite.

I don't know he's happy with us, but he's not unhappy.  I know it's not the life he had, but I think in other ways we give him ways more attention and love. He has run of all the downstairs, which he never had and he does love his walks.

Soon I'll have to get a video of his dance when he sees the leash.  He is so excitable.

Of course, we also had his bad bad bad pneumonia and one other serious infection - but he is 11.25 years old.  Dr. Mandel's office knows him all too well now, but such is the life.  Oddly enough, those bouts with sickness is what solidified how much we care for him and how we want to do right by him.

Yes, he's ours and we couldn't be happier with him - even through the few hundred poop bags, the two leashes we've gone through, the two dog beds he's ripped up, the pills he's been given, the cone he has worn and such.

We've gotten much more back in looks, wagging tails, kisses and doggie dancing.  And cuddling. 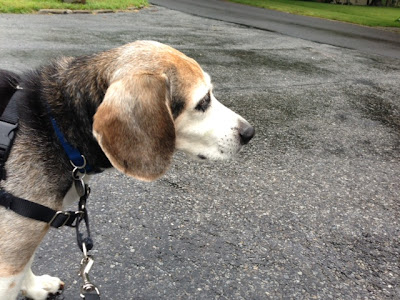 Picture on his anniversary date with us.  He's going grey. 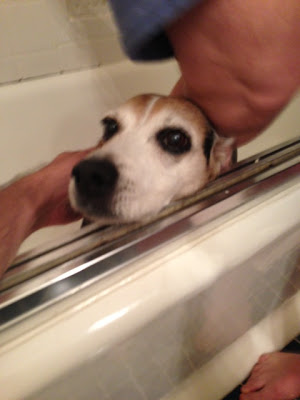 Tuesday was bath day.  He's actually quite calm about it all. 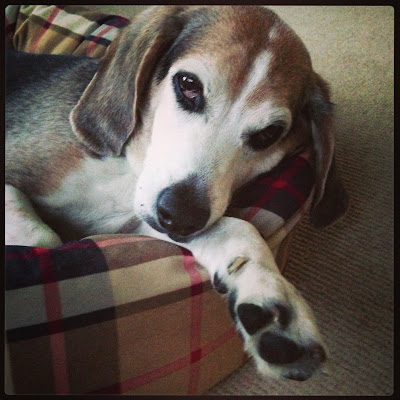 One of four Instragram pics I've ever taken.  I am not as enamoured of that app as a few million other people seem to be.  But this pic came out purdy. 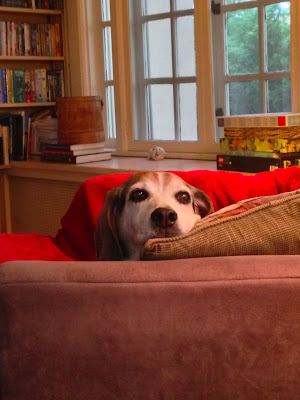 Someone has soulful brown eyes to go with his big black nose.  (oh, don't go all Paula Deen on me with that comment!) 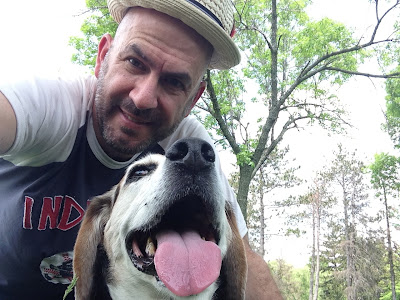 ....and one very large pink tongue.  Petey has one too.


That's it.  One year down.  Hopefully many to go.

my meredith is 12 and going grey also; but you would never believe it the way she runs around the house like a ghost was chasing her!

MoJo (my Pembroke Welsh Corgi) had his tenth birthday last week. So that makes him 70, which is my age. I think he is trying to mimic me, because now he walks like I do -- none too well. He has become a quiet houseboy, no longer able to retrieve a tennis ball. He and I like to sleep a lot. Who says, dogs aren't like their masters?

Happy Anniversary doesn't seem quite right since he seems to have always had a place with you but I'll say it anyway - HAPPY ANNIVERSARY!

So sweet. I'm so happy for all four beings in your lovely household.

Aw, such a cutie. I wish Georgie and Petey could play together. The cute would probably kill us though.

Oh what joy!
How could you now fall in love with him?
When you wrote about him a year ago, I held my breath thinking this will be a matter of time until you are won over! :-)

Such a cute dig!! Happy anniversary.