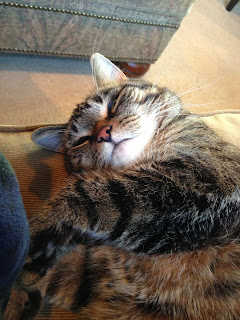 But today is Sophie Smut.   Ok - it doesn't have the same ring of alliteration, but I got nothing else.

Today - if Rescue Village is to be believed - is Sophie's seventh birthday.  We got her four months later, but they say that June 15th is her date of birth.

I know she had at least two other siblings, as they were in the cage when she went to her forever home.  But I don't know if there were others who were adopted before her.

Her shelter name was, ugh, Fabiano.  A male name at that.  That wasn't going to do, but we struggled for a week and picked one while at her first vet visit when they asked for one.

Sophie wasn't the only cat we entertained.  There was another short-haired brown tabby that we played with.  I loved her, she was so sweet.  But she had a cold, and while that wasn't a set-back, we felt that maybe her true personality wasn't coming out because she was under the weather.

I'm sure I've said before, but when we did name her, it was after Sophie's Choice.  I mean, the shelter had hundreds of cats and picking one meant leaving another behind.  It was heartbreak - but it is a no-kill shelter, so I felt a little better.

I've also mentioned, she is pretty much a dog.  Always with us, comes when she's called, plays and fetches.

It's great that she gets along with her brother too. Pairing her with a dog, instead of another cat, is the best thing for her.  She is not in competition the way she was with Tovah. 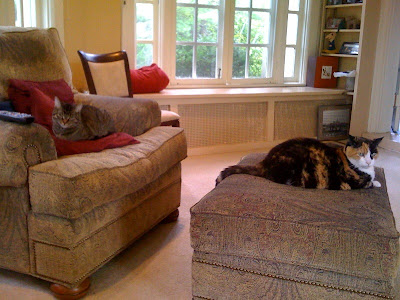 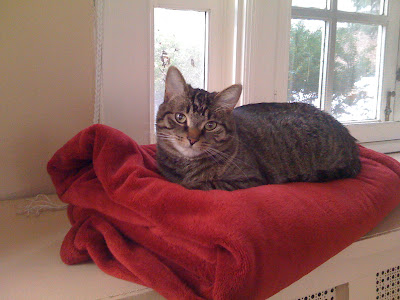 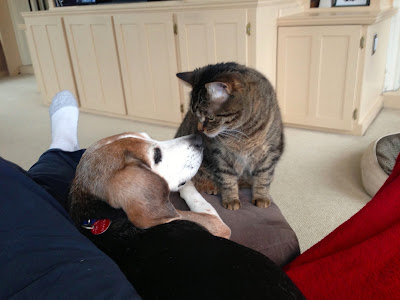 Soph is good about sleeping with me.  Sure, she is all over 710 in bed, but when it comes to snoozeville, she presses against me.  It's not that she loves me more - she just knows I will accommodate her, however she wants.   710 will not.  She knows she has me wrapped around her little paw.

how about "sophisticated sophie"? happy birthday, pretty girl! you got your daddy right where you want him!

I hadn't seen the two kids so close before! My Sophie—a dog—has had four cats, and they all hated her. Poor thing. We still have my daughter's two cats for another week, and Sophie will go the long way around to avoid these hissing and spitting creatures.

Happy birthday to your Sophie!

Happy Birthday, Sophie! You look just like my Torrie and she's also seven. :-)

Happy birthday to your little girl.