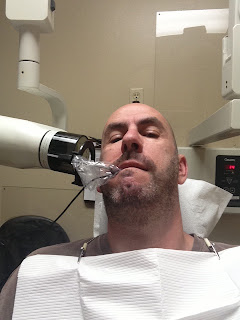 I know you want to know about my semi-annual (or is it bi-annual?) dental check-ups.

I love my dentist. She's great, but the entire process I could do without - thought I am 100% better about my fears than I was as a teen through my mid-30s.  Actually, I'm quite stoic when going to and being in that chair.

I've already had eight fillings done without Novocaine.  I've had a crown - that was botched. A redone crown.  I've had gum grafts and a few cracked fillings.  I'm only a set of partials away from being my father.

710 and I share the same dentist, as you might imagine.  Maybe not.  I don't know the dental habits of married couples - gay or straight.

Dr. Dorothy doesn't know my sisters, has never met them and for the life of me, I don't remember initially talking about them. How can you talk at all with equipment or fingers in your mouth? Yet, she remembers and I end up talking more about them there than I even do at my parent's house - which admittedly, still isn't much.

I did all my pre-check routines before leaving the house:  brush? yes.  floss? yes.  bi-lateral boogerectomy?  yes (what? I'm going to be laying back with them seeing right up my nostrils!).  nose-hair trimming?  yes. (see the boogerectormy reason).  tongue scraping and brushing of said tongue?  yes.

I could only figure my breath wasn't bad - but if it was they didn't say anything, nor could you see a curled up nose with those masks they wear.

It was also xray day.  Lots of xrays for some reason.  Not just the bite-wing, but an entire series that would be more like a panorex.  I have no idea why.  And I also didn't get a lead vest for it - not that I'm so worried about radiation exposure.

As it turns out, all teeth were healthy. So were the gums. I got commended on my gums.

The new hygienist was fine.  She told me I had a 'wild tongue' and it was 'defensive'.  ...I'm sure that's what all my previous "dates" have said too.

But in reality, as much as I've come not to fear the dental arts, when they jab your gums, or scrape your teeth - yes, I try to keep Mr. Tongue out of the way.

I'm good for another six months.

Email ThisBlogThis!Share to TwitterShare to FacebookShare to Pinterest
Labels: Dentist

what a frightful photo!

OMG - an 'oral' that is definitely NOT a pretty sight!

What's with the no lead vest? That kind of freaks me out for some reason.

Giing go the dentist is a pain.