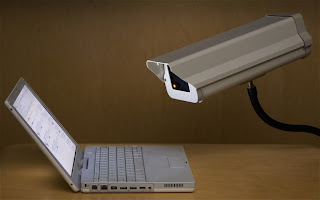 I know it will look that I am on the wrong side of this - to a certain degree - on the "revelation" that the NSA, CIA and U.S. Government have been collecting information about certain factions via internet and phone usage.

First off - the Patriot Act via GWB-era (which Congress approved, so they can shut the fuck up about being morally outraged) and was well known even back in 2001 - I'm not sure where the surprise comes from.

Secondly, who the fuck thinks there has ever been privacy on the internet?  Or cellphones for that matter?

Your workplace can capture sites you've visited and even capture your keystrokes as to what you're writing.  If it gets that granular, why do you think the higher levels weren't always doing it.  So can parents monitoring their kids. And it's not like you didn't know Gooooogle, Amazon, Yahoo and anyone else wasn't mining this shit - and selling it at that.

If you've ever been on Yahoo email, have you never ever noticed that when emailing friends about, oh say, a vacation cruise, that your ads all the sudden were from Royal Carribean?  Our email group noticed that back in the '90s and even joke about how long it will be before such an ad appears as we chat about a certain subject.

There were law suits a decade ago, singling out Verizon for such tactics of selling information of your usage. This is nothing new.

You have GPS built into each and everyone of your cellphones (assuming you didn't buy it in 1997) that can ping wherever you are, the tower that is being used closest to your call, etc - and no doubt many-a-parent has used that to track their kids or cheating spouse.

There are video cameras on every street watching every move we make.  There is Google Earth, Street View and any number of weird sites posting pics of you on the street (see TapThatGuy).

I know I'm horribly cynical, but the line between being private and having absolute privacy are long gone. HIPAA?  Please!  Immediately on that is release of information for Treatment, Payment or Operations.  Those are some pretty fucking big loopholes.  Don't even get me started on if deemed a Public Health Risk.  An appointment center can't say you have an appointment, but there are dozens of areas who know who you've been to see and for what - so read that Notice of Privacy Practice very very carefully.

Now, do I truly think that the U.S. Gov't are reading my emails and monitoring my phone calls?  No.  No I don't.  If they did, they'd be mighty bored, so, they can knock themselves out listening to me determine what time Sunday dinner is and if I need to bring anything.

Do I think it's a slippery slope that they can monitor these things?  Sure.

But again, there are 300 million of us in this country alone - and they don't even have the resources to keep the airports open,  or roads fixed, so I think for the most part we're pretty sure they're missing big chunks of even the shit for which they're supposed to be looking.

For the disbelievers that think we are all being watched, you're not so important.  Get over yourselves.

...and no doubt you were the same  ones bemoaning that fact that the CIA and FBI had actually monitored the  movements of the Boston Marathon bombing suspects but didn't act on it.  You had no issue those two were being monitored, just that the agencies didn't move on those two guys prior to the event.

You were also the ones probably high-fiving each other because so many cameras caught the two on video that they could be identified and captured as quickly as they were.

This entire "monitoring" scenario doesn't go both ways.  It cannot be "I want it when I want it, and for whom I want it......just not me".  It just doesn't work that way.

If the government is to be believed, not only does someone being monitored have to have ties to terrorism or terrorist organizations, but a judge has to sign off on looking at the records.  Are they perfect stop-gaps - no?  Are they even real stop-gaps?  Who knows.

And let's face it, the government has been watching certain people and certain groups since the beginning of time - even if you just want to go back to pre-WWII.  We monitored Japanese and Japanese Americans.  Hell, we interred them - just in case.

In the '50s, we monitored activities of possible and actual Communists....and kept records on them.

Yeah, then we spied on each other's political party.  ....and then allegedly after 9/11, we monitored terrorists, and we all knew civil liberties were being stripped away.  Exactly which part of this is new to any of you?

But the terrorists aren't abroad anymore.  Oklahoma City?  Boston Bombings?  We now are part of the terrorist community.

The NRA should be thrilled - because if the feds were truly watching, they'd have known of an Aurora, CO man who bought 4000 rounds of ammo on-line, or of a guy in Connecticut who had multiple assault rifles.

It's not to say the government didn't know, maybe they just couldn't get together to act on it - so I'm not sure which would be the worse offense.  Or maybe that nut job just didn't break any laws so there was nothing to be done.

The electronic era has more difficulties, more opportunity.  I am not saying I'm for what is going on, but at least I'm realistic - or just too beaten down - that it has always been happening.  Again, there is little new under the sun here.

In the meantime, I'll use all this renewed news to my advantage.  When my mother complains that I don't call or email enough, I can tell her that I'm afraid I'm being watched.

Like most inventions, the idea or the creation is usually vastly different from the applications and maximizations. ATM camera's were first used for security if the customer got robbed or the ATM card was being used fraudulently (I hope.) Someone thought to look in the background for tracking purposes (as seen on every letter show NCIS, SVU, CSI...

Realistic or beaten down - good question, probably both. But better then the other side - paranoid, right wing nut.

I don't mind the NSA doing this. As you said, it's been going on for a dozen years so there's no sense crying about it now. We had our chance and let it go.

At least I'm out to the NSA and don't have to explain anything to them, unlike my family and coworkers.

We were outraged when the Patriot act was implemented. But too many people were too afraid to speak out. Afraid of terrorism and afraid of being painted “unpatriotic” since the unconstitutional act was named “Patriot”. Now people are finally speaking out. This is a time for change - a time for improvement. Not a time for apathy and surrender

Kinda like the guy from Walmart Security who had to watch my blog/twitter/facebook activities. But I might have been evil on purpose then, because I knew.