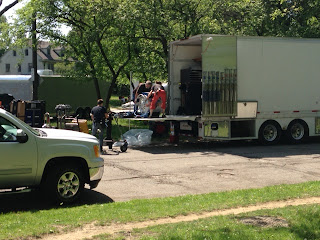 Oh, I got nothing going on that isn't basically yoga related.  I've been a yoga monster lately - and nothing really to show for it.

I guess my Balancing Half-Moon is better, but that is about it.  I do find it amazing that every single instructor will tell you how to do Downward Facing Dog a different way.

My hands aren't in the right place, I'm too high, too low, not extended enough, not close enough, not deep enough.

It's like a round of golf with my father. I could do exactly what he says and I"m still doing it wrong. No winning.

About a half mile from us they are filming a new movie with Kevin Costner.  I don't think it is the Postman II.

Believe it or not, it is a movie about the Cleveland Browns. No joke.  Though I'm not sure if it is supposed to be a comedy or not.  I'm guessing not, because I'm not sure Mr. Costner is the "ha-ha" type.  I am doubtful that this will be like Major League.

But Cleveland has been having some movie activity as of late.  A good part of the Avengers was filmed here two years ago, as was that bomb, Alex Cross.  Captain America is going to do three weeks of filming starting next week.

I did walk by the filming of the Costner flick, but there wasn't much to see that wasn't Teamsters and trucks.  They were doing actual filming in a house, but it wasn't enough for me to stick around to see who I could see.  I don't know anyone.


Song by: John Jennings
Posted by Blobby at 7:03 AM