What to Keep and What to Throw Away 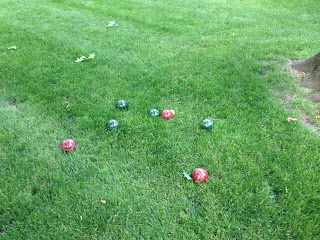 How was everyone's holiday weekend?  I forgot to axe.

The weather was very un-May like.  Very cool, never breaking 60.  ...and that didn't include wind.

We had two outings - one family; one neighbor related.  Both fun.

The family one was a gathering to celebrate my niece's college graduation.  It was low key, but the most interesting thing was being asked to bring Petey with us.

This sister is the one who asked us to take Petey 11 months ago.  I think it was weird for all involved.

Petey had only been in that physical house for a month, but was seemingly familiar with where he could and could not go - at least according to their rules.  I didn't care where he went.  But he stuck to the kitchen, mostly because that is where food prep was.

Most interesting was how he got along with his (ex) brother.  He and Boomer played like they had never been apart.  Boomer is a little more territorial about stuff than Petey and let's face it, this was now Boomer's house.  But things went well with them.

Clearly my sister and her family missed Petey and were all over him with love. But us leaving was tough - for them.  I think my sister was on the verge of tears. But she knew he was going home with us and to a good home, and they are welcome to visit him anytime they'd like.

The next evening was at our friends & neighbors.  Just the four of us having salad, ribs, corn and apple pie.

I think I may have played one other time in my life.  We split up into teams - and we were not paired with our own husbands, which was fine.  Tom and I were way ahead and totally lost the lead - and the game.  It was fun and I tired not to be too competitive, which can be tough for me.

Overall, it was a low key weekend but one that will hopefully kick off summer-time weather soon.  As it is, nothing but rain in the forecast for next few days.

Song by:  Mary Chapin Carpenter
Posted by Blobby at 12:30 AM

low key weekend for me too; cool & windy. and my baseball team sux. but NOTHING says "memorial day" than chinese food! :)

Nothing strenuous happened where I live. I remember napping quite a bit since I lost sleep over various things.

I read a book start to finish. Can't remember the last I did that!

it sounds fine to me!

I went camping at a clothing optional campground. I don't want to get old now.