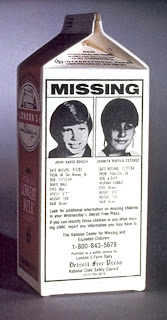 I know the story of the three kidnapped girls (now women) in Cleveland have been making the national news.  It's good news - well, it is now.  Not so much for the last decade.

They even interrupted the Indians game to provide an overhead announcement that they had found them.  At least two of the three women dominated the news for months on end after their disappearance and then about once a year during the anniversary of those days.

That the three were still local and the trail was so cold seems a little creepy.  Creepy that the guy could almost get away with it; creepier than our law enforcement had it right under their nose with nothing.  It's not too different than the guy who had murdered 11 women and buried them in his house or backyard and no one bothered to notice - even with the smell.

Since some of the women were of color (all in the murders and some in the kidnapping) it always goes back to theory that the police and the media don't place as much importance on their plight.

Even Family Guy tackled it in one sentence with Stewie saying:  "We need to get out of here, black guy gone missing, the news will be all over that!"...

It's great these three were found.  How much physical and psychological damage has been done will take a while to determine.  No doubt Law & Order SVU is already drafting the script.  Ripped from the headlines, indeed.

There is much fury over the 9-1-1 call Amanda Berry (one of the women who escaped) made.  To the point, the 9-1-1 operator.  I thought it was questionable how well it was handled.  Go on-line and look, commenters are outraged - not that it takes much to get internet trolls all riled up.

But my favourite - and yes, I'm kind of serious - is the neighbor who found her and helped her escape also mad a 9-1-1 call.   The guy is great and just can't be bothered by the police system's shit:

"Hey bro," Ramsey tells the 911 operator. "Check this out. I just came from McDonald's right? So I'm on my porch eating my little food, right? This broad is trying to break out the f-----g house next door to me, so there's a bunch of people on the street right now and s--t. So we're like, 'What's wrong, what's the problem?' She's like, 'This m--------r done kidnapped me and my daughter... She said her name is Linda Berry or some s--t. I don't know who the f--k that is, I just moved over here bro. You know what I mean?"

He then answers the 911 operator's questions about the woman, what she looks like, and what she's wearing.

Ramsey tells the operator an address which he says corresponds to Berry's location, not Ramsey's home address. "I'm smarter than that bro. I'm telling you where the crime was, not my house," he says.

"Are the people that she said did this, are they still in the house?" the 911 operator asks.

The operator then asks him to check whether Berry needs an ambulance. "She needs everything. She's in a panic, bro. She's been kidnapped, so, you know, put yourself in her shoes."

"We'll send the police out," the operator responds.


I'll give it to the families, they always were trying to get on the news and never gave up. I don't know that I would have that kind of faith after a few years, let alone a decade.  Though I totally feel for the oldest woman whose family was not looking for her and always assumed she had taken off on her own accord.  Her re-entry has to be tough, as her family just never bothered to pursue her disappearance.  "love ya.  mean it."   Yeah, that's not gonna cut it.

Look for Mayor McCheese to give Mr. Ramsey a lifetime supply of food for his continued product placement.

I read over at Kenneth in the 212 that the son of one of the kidnappers was a reporter who worked on the story when it first happened!

RE: Law and Order - they've done at least 3 shows with found kidnap victims - one of which they had to arrest the victim for committing a crime.

I'm glad they were found alive.

This kind of thing is why we're protective of our kids. My 11-year-old daughter (who knows everything) keeps telling us that we're worrying too much. We tend to disagree with her, much to her chagrin.

She has absolutely no idea what's out there.

Sean (One of the other ones.)

While, of course, being glad of their release, (and who can not but rejoice?) this has been top story on the U.K. news too, though exactly why that is is a mystery, there being, as far as I know, no direct British involvement. Had it been in China, Russia, India, Brazil etc it would hardly have merited a mention. However, much relief all round, certainly.

I think I heard someone saying that "God had answered their prayers". Now maybe he'll tell them why he took so flaming long about it!