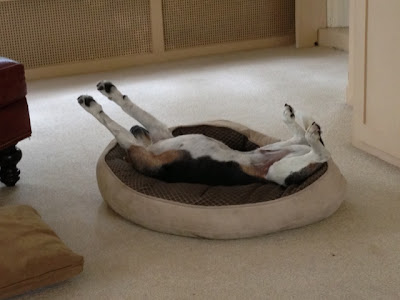 Oh, I'd like to say he was just stretching, but he wasn't.  He was sleeping.  Like this. Yesterday morning.

He's a peculiar doggie, but lord he's fun to watch, especially with his beds.  You might notice the cushion to the left of his bed. Sometimes he will stretch and head and legs will be flopping over either side of his bed.  That is when 710 takes said cushion and props it under Petey's head so he doesn't have to have the neck bend over to the floor.

...and totally worth it.

Well done to you for avoiding the temptation to tickle his tummy - that is IF you did.

wonder what he was dreaming?

Now THAT is one relaxed dog. It is a testament to his new owners that he feels so safe that he will sleep in such a vulnerable position. Such a cutie! The dog too. :)

Mighty Dog! His cape is at the cleaners.