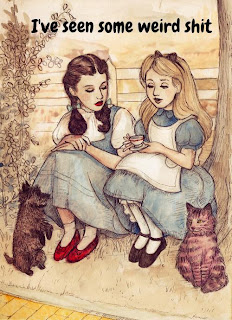 One dream that has lasted two nights.

What kind of fucked up world is this?

My sleep life has been spotty, at best, this last decade, but this last week or two has been beyond the pale (I think I'm using the phrase correctly).

My fitbit would tell me how restless my sleep has been, but lately I haven't been wearing it to bed.  Perhaps I should.  But that might just depress me to see the results.

I had remembered my dreams, for a while, these last weeks, but now I can't recall what they were about or who was in them, other than Morty, who has made an appearance in most of them.

But these last two nights, no familiar faces appeared.  It was probably a dream sequence I could have used a friendly face.

The dreams the last two nights were apocalyptic.

Total end of the world kind of shit.  Somewhere between the final battle at Hogwarts, the final scenes from Deep Impact and any other  lets-fight-to-save-the-deteriorated-g-d-forsaken-world-that-is-pretty-much-uninhabitable-but-we'll-make- it-work-somehow kind of movie.

Two nights of this.

I'm not sure if it picked up exactly from where it left of on Night #1, but themes, colour schemes, etc were all continued on during Night #2.

Lately my dreams are this way, though maybe not night to night and maybe not quite as grim.  But I can wake, get up and well....pee, then go back to bed and the continuation starts.  I would assume if you break out of the subconsciousness you break the dream cycle.  Clearly this is not happening with me.

No, there has been no red Kool-Aid sipped before bedtime or anything like that.

In the dreams there are battles, or more like, strategizing for battles that could never be won. Unlike the movies where that spirit for survival is present (you know, so the survivors can live amongst the hundreds of thousands of dead and decaying bodies - which they always fail to mention) doesn't exist in these dreams.  They are much more grim, much more morose, much more real.

What it really is, is exhausting.  There is no fit sleep for the likes of me during these periods.

Maybe you should write these down in detail and publish a book. It might be awesome.

what is going on in the recesses of your pumpkin?

Since I'm totally unqualified, I won't even pretend to speculate what that means.

You might try "guided dreaming"; I've had some luck with that. Especially with returning to a dream if you wake up enough to roll over, use the bathroom, etc. Try to keep what you want to happen in your head as you doze back off. There are web sites you can find with more info, if you're interested.

Personally, I take a sleep med (trazodone) that gives me incredibly vivid dreams, not all of which are pleasant. That is listed as a side effect and all the innerwebz forumz seem to say it goes away after a while, but it never has for me. Still, better than the other (scheduled) meds, which can lead to actual activities during sleep. I used to somnambulate when I was younger, so my doc ruled that class of meds out right away.

Best of luck for better dreams.