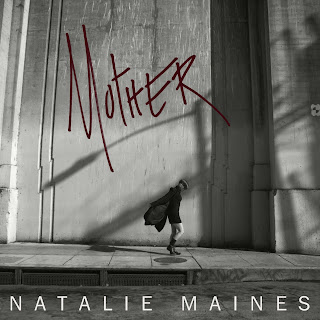 It has been since 2006 since the Dixie Chicks put out their last record. While not officially broken up (they are playing a few live dates in Canada this summer), they haven't been in a studio at all.  Shame - at least in my opinion.

Lead singer, Natalie Maines, was never truly a country singer, as she was training at the prestigious Berklee School of Music in Boston when she joined the Chicks.  Still, her voice fit well with the group's music - she was a strong vocalist.

So, while Maines - who seems to be the holdout of the Chicks getting back to recording - thinks it isn't time for the band to record, this week releases her first solo album, Mother.  For the most part, she is recording other folks' music, as she has never been the most prolific songwriter and has rarely (if ever?) done it outside of a group effort with the Chicks.

Produced by Ben Harper, whom I've "heard of" but never knowingly heard (except that he's the ex-husband of Laura Dern), Maines does well overall though Mother was never to be like her previous recordings.

Maines has always had a strong and distinctive voice, and it was well suited to the music that the Chicks played.  She even showed she and the gals could make a wishy-washy song, like Train's "Hey Soul Sister", sound credible.  But solo work, except for a song or two released here and there, she was in uncharted waters.

I don't expect Mother to be a big success in sales. Perhaps in critical circles, but not sales.

Her title cover of Pink Floyd's song isn't a strong start.  While not horrible, it doesn't quite convey the emotion or depth that Floyd was able to pull off.  Taking chances with Eddie Vedder's "Without You" (not to be confused with a DCX song of the same name) improves upon his version - though his was accompanied only by a ukulele. Different forums, different styles.  And it wasn't the obvious lead off release from the album.

"Silver Bell" has some country-ish elements, mostly due to the slide guitar (and possibly because it was written by Patty Griffin), but it soon gets into heavier rock territory - which sounds good, but the mix is all off.  Nat'le's voice is lost in it and the electric guitars are louder than they should be. It might be fine for a concert setting (to a degree), but it is heavy handed for a record.  I get that from a lot of Griffin songs.

"Trained", without a doubt, is the most non-traditional song you'd expect Maines to do (and she does it with Harper).  It's not bad at all - clearly the rockiest thing on the disk, also the shortest song as well. It took a few listens to truly appreciate, but it grabs you from the first 10 seconds.

My favourite song (so far) on the disk is a cover of Dan Wilson's "Free Life".  Wilson was singer / songwriter of the milquetoast-y group Semisonic, but co-wrote a number of songs on the Dixie Chicks' Taking the Long Way album, including "Not Ready to Make Nice".   The arrangement is different than most anything she's done - but in a good way.

I know most will think that Jeff Buckley's "Lover You Should Come Over" is the centerpiece, but I'm not that wow'd by it.  Save a song or two, I never saw Buckley as the saviour of music that many did - and had he not died, I'm not sure he'd have delivered that kind of prophecy.  I also know that folks think because the song is 7+ minutes long it automatically becomes the focal point of art - but it ain't.

If there are songs that could be compared to something she had previously done, "Vein in Vain" would be it.  It's a good song, a good arrangement, but you can see if a little instrumentation was changed, it's not too far off what Maines graced us with before.

Oddly, the one song that could have been a Chicks-like song (but isn't) is actually a discarded song (for being to rock and roll) from Taking the Long Way is "Come Cryin' to Me" though it goes on about 40 seconds too long and I can do without some of those cheesy background vocals.

Also going on too long by at least a minute is an otherwise good song that Maines co-wrote, "Take it on Faith".  A sparse arrangement at first that builds nicely, a strong voice - but that last 90 seconds really detracts from the first four and one-half minutes. It'd be a great song if not for that last minute and a half.

Yeah, Maines possibly went out of her way to disassociate herself with her (former?) band, but overall the record works.  It's cohesive, it's well produced, well played and well sung.   It still won't be a big seller and there is no home for it on traditional radio.
Posted by Blobby at 12:09 AM