The roof of our sun room is a flat one.

I'm 99% sure the sun room was an add-on to the house, especially when you see the concrete stairs that go down into it. The two sets of French doors were no doubt the openings to what was once a patio.  But now it's a sun room.

Annually, or bi, the roof becomes flooded.  Yes, there are two drains, but they become clogged since crap from the 80' oak tree deposits on said roof.  And there has been rain the last few days - and lots of it.  The roof became flooded.

With more rain on the way, I felt the need to go out and unclog the drains. Somewhere in the back of my head, I just assumed with more rain we'd get a leak or collapsed roof.  I have no idea if this would happen in reality.  The roof seems sturdy and whatever covers it seems to hold up.

But out the bedroom window I went (ouchy on the crotch! - as it's not a normal step out and down), yet still easier than using a ladder to get up to the roof.  I also brought with me a shovel.

710 would normally use a broom to get rid of the debris, but that is usually not sitting in 4" of water. 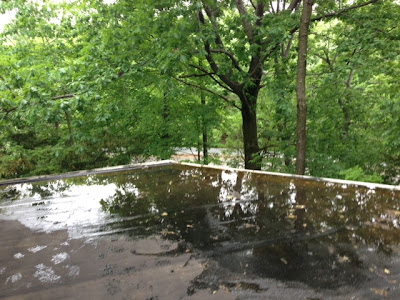 There was a similar flooding on the other side of the roof too.

The debris was whatever comes off oak trees in the Spring. It tumbles around our driveway like...well...tumble weeds  - at least when it's dry.  When it's wet, it sits, goes nowhere and clogs drains.

I honestly think I got rid of 40 pounds of sobbing tree poop (for lack of a better term).  I'd fill up shovel after shovel full and then fling it from one story up, over onto the hill.

Of course, I'd have to go to each of those drains, where I put filters in a few years ago, to unclog what was still catching. But I watched the water go down and get lower, while I froze my ass off up there.  Yes, it's almost June, but it was 40 degrees....and me sticking my hand in cold water and colder slop to clean out.

I'd just ping-pong between the two drains to keep them going until we finally got to this level. 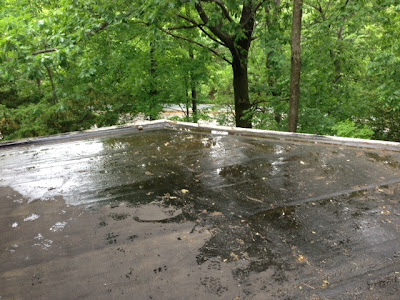 The sun never came out, but the wind finally dried off the roof after a bit.

Now I need to go to Homo Depot for new filters.  The other ones, while slowly working, are pretty clogged with crap that might never easily come out.

...and I didn't fall off or through the roof.  So bonus points for me.

In retrospect, probably not a wise thing to do when you're home alone and the nearest neighbor (if they're home) is hundreds of yards away, though Sophie was sitting in a window watching every move I made.  She wouldn't let anything happen to me, as she can't open the cat food tin by herself.


Song by:  Dashboard Confessional
Posted by Blobby at 12:12 AM

Those oak droppings are called catkins (I learned from Georgie) and we had a bumper crop of them this year, too.

I had a flat roof on the "solarium" in my house in North Carolina. Pain in the arse.

And not the good kind.

Maybe you should invent a tree poop roomba that you could leave up there to eat the tree poop?