I know I already did my Record of the Month post for May, but I didn't do one for April. It's true - go back and check.  Normally if I skipped, I'd just skip and not try to make it up.

Consider this an unofficial RotM.   I am.  I've had this written for weeks and just have to get it off the books. 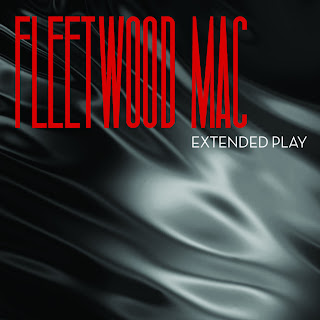 Yes, I've taken a lifetime of flack for being a Fleetwood Mac fan, but as the years go on, it's harder to defend them with minimal and marginal recordings.  I get that they tour for dough - and that the majority of ticket holders want to see a greatest hits act - and trust me, they're getting it.  But it's all been done before and no need to venture into that arena again.

I'd be lying if I said I wasn't curious about their four song Ep.  What had a ten year absence brought (after a 16 year one before that)?   Well, not much - that's for sure.

To be fair, I did not purchase.  NPR streamed the entire four tracks and you could play them as often (or as little) as you'd like.  It beats the iTunes 90 second thing (which is where this disk is ONLY available).

Three of the four are Buckingham tunes - and iffy ones at that.  The one Stevie Nicks song is from 1973 - which isn't a shock. Almost all her material for the last 25 years has been pulled songs she wrote in the '70s.  If they weren't good enough to record then.......guess what?

Let's start with her "Without You".  Cat Stevens should sue for plagiarism.  The music and arrangement has "Peace Train" written all over it.

The criticism of Nicks' voice back in the '70s was somewhat unwarranted, but like a prophecy waiting to be fulfilled, she lived up to it long ago.  Professor Sybill Trelawney would be proud.

Nicks' voice has been shot since the late '80's and for the life of me, the people who trip over themselves to sing (ha!) her praises is beyond me. The woman can no longer sing more than three notes and it is painful to listen to - mostly due to nostalgia.

Her vocal limits work when songs and vocals are arranged correctly. But I can think of two instances in 20 years - two! - where that has worked. It didn't hurt that the harmony vocals helped save those two songs.  For this outing, the harmonies are barely there....and they're all hers.

Buckingham's "Sad Angel" is just half right. It's sad.  It might have worked as a solo song, but not as a band one.  And speaking of solo stuff, his "It Takes Time" is just that.  Seriously, if you're going to do a group record, then a song with just you and a piano isn't the one to present in this venue. Save it for your solo work.  Oh - and it is as boring as all get out.

The only song that pseudo-works is the horribly titled "Miss Fantasy".  Buckingham writes notes he can't possibly hit - and doesn't - but doesn't jigger the vocal arrangement.  It is here that Nick's muted harmony on the chorus actually (almost) saves the song.

What is sadder than the actual release is the band's assertion that this is some of their best work.  Yikes.

I get that they're all 64 years old (or older), but has their hearing gone too?

I'm not sure whether to blame Buckingham or co-producer Mitchell Froom.  Froom was a wiz with Crowded House, Forest for the Trees and Suzanne Vega.  But he bombs out here.  Or maybe this is the best he could do with which he had to work.