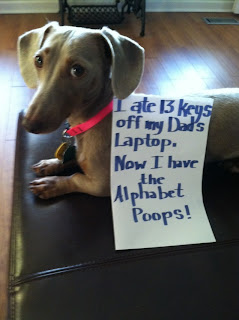 This might be old news to many, but it was new news to me, being the new-ish dog owner I am:

These poor pooches get chastised, in usually funny ways, from their owners for doing things that dogs do.

Yes, most posts have to do with poo - rolling in it, eating it, or pinching a loaf in inappropriate places.

According to their documentation, almost none of them have regrets.

Perhaps it is my imagination, but most of the dogs are pugs, dachshunds and bulldogs (French and English).  Maybe they're all from a very very finite group of users, I didn't pay that much attention.

What I do know is, that we have a pretty easy-going dog that doesn't do nearly anything bad, let alone chew stuff up, and  pee / defecate in icky places.  He's gotten into the garbage like twice, but completely ignore's Sophie's food bowl. He has no interest.

The worst thing he does is beg (only with his sad sad eyes) while we're making dinner.  But he's quiet about it - no barks, no whines, not even the licking of his chops.

It's not that I wouldn't participate in the site if Petey ever did anything bad, but he doesn't.  And if he did, hell, I know I couldn't get him to sit for a picture.  And he always looks guilty, but that just his natural look.

Much of the goings-on with dogs and their owners is predictable, and yeah, the site is a time-killer, but it is kind of cute.

...oh and paging through, i did see two cats and one horse, but it's pretty much for canines only.

Those breeds, and beagles, tend to be the most photogenic. Prop wise anyway.

Except for that one time Petey took a shit in your mouth while you slept and then took a photo of it....