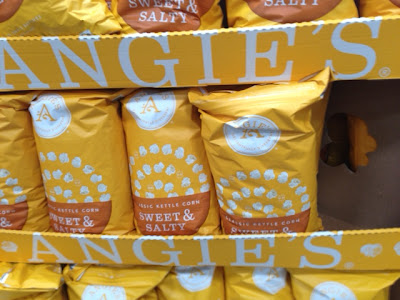 Yes, I know I normally do a "funny" post when it comes to shopping, but not this time.  Well, this might be humourous, but I have come not to bury Angie's Classic Sweet & Salty Kettlecorn, but to praise it.

My mother had it at her house last Sunday.  If you've been to Costco, you understand the folks who hawk their products to the unsuspecting and hungry public.  My mother was one of these.

Now, I'm not even sure she likes popcorn, let alone flavoured kind.  But she put a bowl of it out for "the kids" before dinner.

Turns out, for me, that was a BIG mistake.

In recent memory, I cannot think of a similar food addiction I might have faced - let alone an instant one.  I ate pretty much the entire bowl on my own.  And half a second one, before my brother-in-law showed up and barged in on my territory (though he wasn't as enamoured of it as I).

It's the wrong (and right) comparison to say it's like chocolate covered pretzels.  The sweet.  The salty.  It's just one of those types of things I assume women crave during PMS.

I knew it was a mistake before we left to allow my mother to fill up a gallon sized ziplock bag full of it for me.  I ate the entire bag (save 17 pieces left as to not look piggy) at lunch the next day.  Not for lunch, but at lunch.

It was quite sad.

However, it was not as sad as going to Costco yesterday when I really didn't need anything from there, but figured since I was there, I'd pick some up.

Two bags.  I put the third one back, because I'm nothing if not the model of restraint.

Actually, I am.  12 hours later and I haven't even opened a bag.  But you're talking to a guy who bought  a case of Girl Scout Cookies in March and I've only opened three boxes.  My problem, besides eating everything at once, is once I know I open something, it's gone - possibly forever.  So I just sit on it.

The joke is, I know next time I'm over at my parent's house my mother will have secured me a bag without my asking.  I don't want to be rude, so of course I'll take it home.
Posted by Blobby at 12:14 AM

"The sweet. The salty. It's just one of those types of things I assume women crave during PMS." - HELL YEAH!

I cannot bring something like that into my house cause I would eat the whole bag in one sitting! but it looks so dee-lish!

and your case o girl scout cookies would not be around this long if it were at my house.

yes, I have a sweet tooth, I confess.

You put the BLOB in Blobby! :)