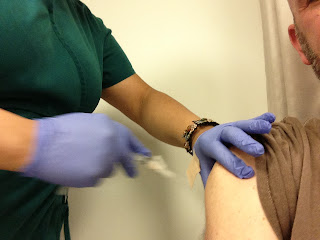 Honestly, I couldn't tell you the last time I received a tetanus shot.

I've been seeing my doctor for a little over 13 years, and at least once per year he or his office will inform me that I'm overdue for my vaccination.

Then, with the advent of the electronic health record and access to a patient portal, I get secure messages stating I am overdue for said vaccine.

Yet, not once have they told me to get it.  Listen, I am never going to be asking for a shot. If you tell me I need it and bring in the syringe, I'd gladly roll-up my sleeve and take it like a man.

However, yesterday I just took the bull by the horns and told the doc to give it to me.  And he did.  Well.....technically the medical assistant did.

I remember tetanus shots hurting.  Not just the injection, but the aftermath - and for days.  So far I got nothing. The shot did not hurt a bit - less than a blood draw.  And 14 hours into it there is zero ache; zero pain.

The same cannot be said for my other arm - the one discussed yesterday.

The doc doesn't know what it is.  He considered sending me to Neurology, but he is concerned that the EMG they'd do on me would be painful.  No doubt it would.   But not so sure it would help either.

He is hoping the pain will just go away (hell - so do I!), and wants to take the wait-and-see approach.  I understand this, but we'll see how long I will hold out before asking for a referral.

The odd thing was, for the 75 minutes I was at the doctor, the arm stopped hurting.  The only time in 10 days. Naturally, an hour afterwards, I was right back to where I was.  Somehow this did not surprise me.  Par for the course in a way - not that there was any physical evidence of pain to begin with that I could show.

We'll see where this goes, but at least now I can get jabbed by some rusty barbed wire and not have to worry.

Song by:  the Rolling Stones
Posted by Blobby at 12:01 AM