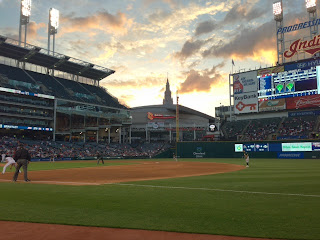 Last night was a beautiful night.  Mostly clear and warm enough to make it to the bottom of the 8th inning for our first Indians game of the season.

But we had great seats - first row right past first base.  Oh - and we won.  That is odd - not for the Indians, as so far we're doing ok.  Not stellar, but we're not in last place.

It's odd we won, because I was there.  Almost always we lose when I attend a game.  Though truth be told, I was away from the seats for the first three home runs, so I think I helped somehow.

I'm guessing it is because of my voracious appetite lately. I am always hungry.  Last night it was a brat (not a good one), a slice of pizza (actually not bad) and yes, two scoops of ice cream.  But I had no beer, so I feel I came out ahead on the food pyramid.  Don't ask how - it's science, you wouldn't understand.

What kills me is, the stadium no longer has onion to put on hot dogs and brats.  What is up with that?? Don't get me wrong, it wasn't going to help the food, but it's a good distraction from the snouts and entrails that are in those things.

And what really kills me is Sugardale Farms still has a race around the 6th inning between Ketchup, Mustard and Onion.  Onion shouldn't even be allowed to participate. 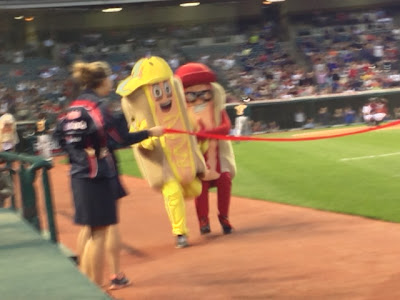 Gladly, Onion came in third - though the race is always totally rigged.  And Ketchup has my glasses.

We took our friends Tom and Sal - and it seems they had fun.

We have some good players, and only a few personalities.  Nick Swisher is new to Cleveland (from the Yankees) and he interacted in a good way with the fans - we made him laugh and vice versa.  He seems glad to be here and made that known pre-season when he got traded here.  Hopefully it will work out.

So it was a good first game of the season....for us.

your guys kicked our asses a week ago; my team is so pathetic it ain't funny.

your guys will be here on 5/14-15, and you will probably kick our asses again.

at least we have onions for the hot dogs!

"Don't ask how - it's science, you wouldn't understand."

I have never been to an MLB game. Just LSU baseball.