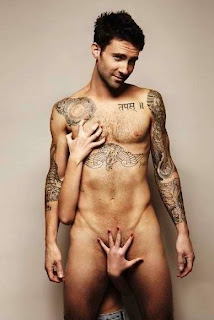 It has come to my attention that it is possible - just possible - that my cousin might keep me around for his own gain.

It's been a year since I started doing yoga with him twice a week, and now I know why.  He brought me into his yoga crew possibly just so they can talk to me about him when he's not there.

I almost - almost! - told them he was in Brooklyn to attend the Smallest Penis Contest.

David also did send me the link to the contest, so it's possible he is up there for that.   ...and if he's participating, that is so so sad. I must have gotten those genes from my mother's side of the family.

(un)Fortunately, I'd lose that contest.

...unlike the winner of that contest.  I don't own a magnifying glass - though there is an app for that.

OMG, it's like a beauty pageant. Check this out.

I would nominate my ex-spouse for this contest; you really DID need a magnifying glass to see it when aroused!

as for adam levine, I'll take him any way he was made!

I think I know what "hand activity" you were practicing; yeah, the ignorant would not get it!

I think I ran into your cousin at the Contest. He entered the grower not a shower category. I think it was him as his pubis was crowned with grape leaves and his nether regions with high end designer plastic grape. He was wearing a "i wish I was with Blobby T-shit which he said kept his level of excitement down allowing him to come in third. In horse racing they call this showing but he didn't show much.

I'm not particularly a fan of Adam Levine, but I do like a majority of his tattoo work.

And speaking of your hand, is it any better?