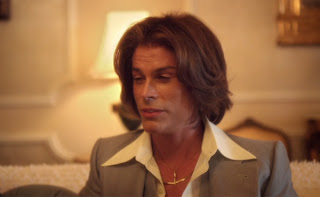 Oh - one other thing we did on Memorial Day weekend:  watched the absolute middling Behind the Candelabra on HBO.

Directed by Steven Soderbergh (sex, lies and videotape, Oceans 11-47), it is a throw everything at the wall to see what sticks kind of "movie".

Actually, it was allegedly supposed to be a theatrical release, but Soderbergh said no one would touch it because it was "too gay".

Oh, it has over-the-top homoness, but let's be honest, it has a very very very limited audience who'd shell out $12 to see it - and I'm not one of them.  Not for $12, that's for sure.  And the subject matter wasn't that interesting either.

Liberace was a little before my time.  Sure I'd see him when my mother watched Merv Griffin ("oooh....we'll be right back), but his music and fashion style was not mine.  Even all the times I was in Vegas, I resisted going to his museum.

It doesn't help that I find Michael Douglas creepy without the lisp, sequins and rings.  Adding man-on-man action wasn't helping at all.  Nor was an iffy script.

I get that the script was based on Scott Thorson's book, but there was no real depth to what Liberace was hiding and how.  It was a fluff piece.  Not a fluffer.

The best part for me was Rob Lowe.

OMG - he was pure genius as Liberace's plastic surgeon.  You kind of recognize the voice moments before you figure out who he is.  His performance is disturbing, hilarious, and yes, genius.

As for the rest of the story, I found myself caring less and less about the main characters as the show dragged on.

I found Candelabra to be lightweight / throwaway television.  A show barely worthy of HBO and certainly not theater caliber.

Sure the show is "gay", but not sure it's "too gay",  Again, I wouldn't see it being a draw for the general public. I don't think anyone really cares.  I would think that Liberace's core audience has long stopped going to the movies.

Allegedly, this was to be Soderberg's directorial finale.  He might want to consider going out on a higher note.

In other words I should scream at HBO's programming department, "You delayed the 'Red Wedding' a week for this???"

Yes, I missed Game of Thrones.

Oh dear! But you've not deterred me from seeing it when it gets its cinema release here in a few days time.
As one who grew up closer to L's own generation, I do recall him appearing on shows like 'Sunday Night at the London Palladium' and the 'Royal Command Performance' (A meeting of 'queens'!) but not much else. We didn't get that many American TV shows where, I guess, he probably appeared more frequently, (And not forgetting his appearance as one of the villains in 'Batman', of course!)
From the clips of 'Candelabra' which I've seen, Douglas doesn't look facially much like him, though his capturing the voice didn't sound too bad.
Anyway, I'll still definitely be paying out cash to see this even though it sounds like it's one to just sit back and try to 'enjoy' what one can.

Appreciate the review. I'll do one when I see it the movie on Netflix (I don't get HBO). Liberace was during my time so I'll probably have a better perspective on his portrayal.
Retired in Delaware

I visited the museum in LV a few years ago. It was interesting to see the costumes but the facility and the displays were dated and a little sad. One of the docents, at least age 70, saw me reading a card in one of the displays that alluded to AIDS and told me she didn't know why it said that. "He was always a very heavy smoker and I know for a fact he died of lung cancer." What struck most most about that was not that she was contradicting the display but that she looked at a group of 6 middle-aged men who were visiting the museum together and thought this was info we should have.