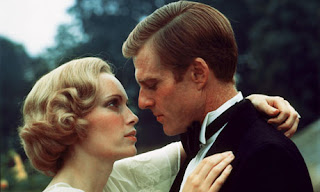 Good for some movies, but not all.

We saw the Great Gatsby yesterday.  It wasn't bad, but meh, it wasn't great.  710 liked it better than I.

I should know that Baz Luhrmann likes his visuals, and in certain movies (Romeo + Juliet, Moulin Rouge) it can kind of work.

But with Gatsby, the visuals, the 3-D and the sounds and music were way more important than an almost 100 year old story. I suppose it is almost fine if you didn't know the book - or if you didn't like the book.  That was not me.

Personally, I like Fitzgerald - and while Gatsby isn't my favourite of his work, I still like it.

That said, Luhrmann stays fairly close to the storyline, with smallish changes - so he didn't fuck that up too much, though the point of narration of Nick Carraway comes from a different vantage point.  That was totally new, but not that distracting.

Since I wasn't a teen-aged girl when Titanic was released in the late '90s, I don't get the appeal of Leonardo DiCarpio (though he has purdy blue in his eyes - though that might be CGI too), but he was fine in this, though he won't be winning any awards that aren't MTV related.

It could be argued (and I do) that Carraway is the main character and Topher Grace Tobey Maguire was a bit soft. Same could be said for Sam Waterston in the 1974 (?) adaptation.  I never read the character quite like that, but maybe it was me doing it wrong.  Actually, Topher Grace might have been a better idea.

Michelle Williams' lesser co-hort, Carey Mulligan, is fairly forgettable as Daisy Buchanan.  She's no Williams (who would have been good for this).  Hell, she's no Mia Farrow.  I've never been wow'd by her and this role isn't making me think she has anything to truly show as an actress. She's pleasant to look at, but no substance that I can tell.

And I get that Luhrmann likes to put modern day music into old stories (see Romeo + Juliet), but I don't really want or need to hear Jay Z, Beyonce, will.i.am and the always horrible Lana Del Rey - especially when accompanied by fireworks and streamers.  Snore. That Jay Z is a producer (which I found out at end credits) is now less of a surprise how his own music eke'd in there.

It is not that the visuals are not good - they are. Luhrmann (like Tim Burton) is an expert at that - his problem is (unlike Burton), he just doesn't know when to stop.  With him, he allows the story accentuate his vision and not the other way around.  Excess is not Enough - seems to be his credo here.  You see and get the story, but you don't hear the words - if that makes sense.

The 3-D was a bit much, especially since this wasn't an action movie (though the technology looked good in the new Star Trek trailer).  It worked in one or two scenes, but overall, like most movies, it's so not needed.

Gatsby was an ok distraction for a cold rainy Saturday afternoon, but for the story itself, I'd either stick with the book, or the Robert Redford / Sam Waterston / Mia Farrow version, unless you're just in it for how Luhrmann tops himself visually.

I'm not sure how a story like "Gatsby" benefits from 3D.

A very valuable review which I'm glad I read before seeing the film, which opens here Thursday. You seem to confirm my fears (esp. re music and casting) though I'm reassured by his keeping close to the book (which I'm about to read for the 3rd time, before seeing this film).
I usually like Luhrmann and LOVED 'Moulin Rouge' but was afraid that he might have over-reached himself this time, and it sounds like maybe he's done just that. But, if nothing else, this film will have done good if it can diminish the strong visual memory of Redford in the title part, which was actually good as far as it went for the 1974 film, but far too visually arresting for the nebulous character he represents. Can't see Carey Mulligan, charming as she is, out-doing Mia Farrow as Daisy.
Haven't decided whether to see it in 3D. Suppose I will, though your comments hardly make it essential.
Thanks.

It's only one of my favorite novels ever. Why *wouldn't* I want it set to rap music?

I did not care for this "Gatbsy
' - it was far too moving around.