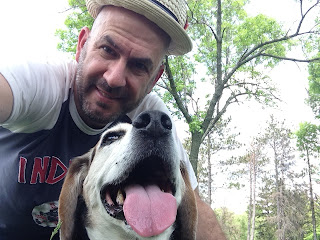 In the never ending quest to keep Petey entertained, I took the man to Acacia Reservation.

Until less than a year ago, Acacia used to be a country club.  For years, members were wondering if they could save it or sell it - and if the latter, would it be retained as a country club.

Of course, the idea was to sell it for retail development, because if we need anything in this life, it's more stores to shop for nothing in.  Beachwood and Lyndhurst has more than enough of that.

But the powers that be sold (or gave?) it to the metro parks and it is now, as Quasimodo might say "a sanctuary!"

Currently, it is still very much golf course looking. The rough is rougher, but the fairways are still short, as are the greens. But you can see that the plan is to grow it all in to be more wild.

Petey was kind of in his element, though he's never been in a place like this.  The grass we went in (I tried to stay off cart paths) was belly-high.  To be clear - his belly, not mine.  It's like he was on a fox hunt.

But Pete has a walking problem - he doesn't know when too much is too much.  He'll keep plugging away on his jaunt and when it's time to come home, he won't move.  It's not that he can't, but he won't. Perhaps part is that he can't.  He is an aging man.

What he doesn't do on these walks is drink.  I carry his LL Bean collapsible bowl with me along with a bottle of water.  I pour, I set it down, he looks at me like "what the fuck, dude?"  He's panting like a maniac, but he'd rather be stubborn than take his dad's help.  Just like a son!

This walk was different.  The outside temps were pushing 90. We tried to stay in the shade, but there were 1,209,773 new smells to be smelled and 43,001 new trees to pee on.  Eventually we'd sit under a tree (that he didn't urinate on) - forced rest stops for him - and he was hot enough that two of those times, he drank. 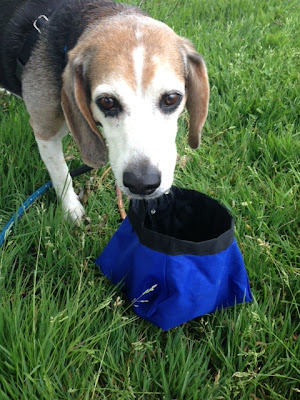 It wasn't enough water (my opinion), but it was a start. It got us through the rest of the walk and back to the car.

I find it important to take Petey on car rides that don't end with the kennel or vet. I think he liked it, but there weren't a lot of folks out and about - and we didn't run into another dog, though he did see geese and of course, squirrels.

The adventure completely knocked him out for hours after we got home (where he drank his entire bowl of water).  He was in his bed and out like a light within three minutes.  Tops.

We'll try Acacia again, and maybe get David and Ted to join us, along with Petey's other dad. Maybe we'll walk the back nine that time.

Dogs crack me up. When I was a teenager, my friend at the time had a black lab that literally peed in every other yard we passed by. He also hit every street light and fire hydrant, too.

doga and their pee calling cards! how old is petey?

Try adding some low sodium chicken or beef broth to the water - as much as 50/50. The flavor may encourage him to drink.

Very fine photo at top, B.

What a cute dog. They are always so fascinating.

I'm partial to your hat.