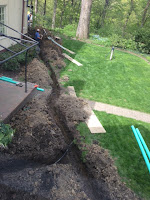 You might not remember but in my 12 of 12 last month, I mentioned how when it rains; it floods.

Ruckiry (not Jon's boss) , we have not had issues with water going into the basement, but we feared it was only a matter of time.

The downspouts, if they worked at all, were really just depositing water into the yard and not into the respective pipes that exist.  We're not sure if this is the same issue that will make the floor of our garage seep from underneath, but it kind of stands to reason that it might.

Anyways - in that 12 of 12, I mentioned that we had plans to get this all fixed, and we hope we did.

The workers showed up Thursday to start, and I have to say, I'm surprised how much damage work they did in that first day.

They completely tore up part of the front yard, and severing the invisible fence wire. But they got the front done (though not yet put back together at that time).  They immediately started on what I would consider the true problem area, though let's face it, they are all interlinked. 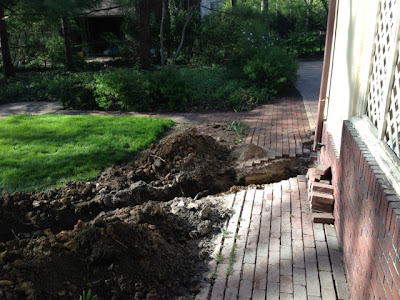 Poor Petey - he did not know what to do when we tried to let him out.  His main artery to the yard was literally cut off. ....and g-d forbid he go out through the garage.  He just could not grasp that one.

Though at a night time outing, 710 told me that Petey ended up in the ditch.  It is still not clear to me if he jumped in or fell in.  But it was dark and that had to be either no fun for him, or a thrill of a lifetime.  He's not talking.

But as yesterday's progress continued, I was concerned they wouldn't be done in the two day timeframe they promised.

Not only was I wrong, but I think both 710 and I were pleasantly surprised. 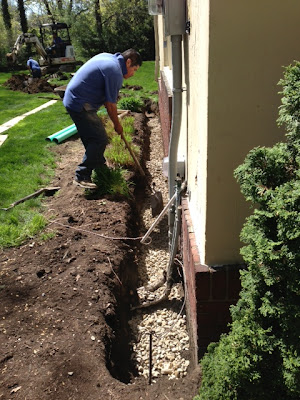 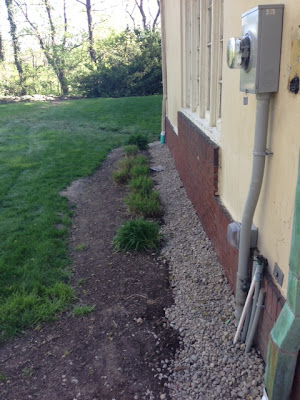 Just don't look at the foreground, but keep looking farther and you'll see the backhoe and a big ditch.  The grass looks hardly disturbed.  I mean it is / was, but to those who don't have to cut the lawn, it looks mostly untouched. 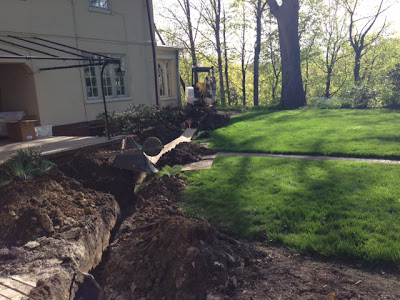 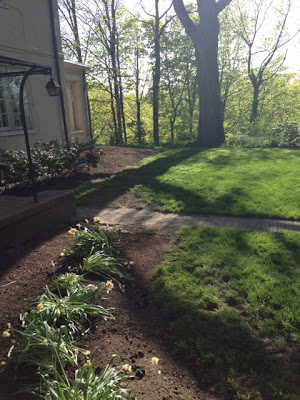 Again, you wouldn't really know they were there, since most of it was flower garden and not lawn.  I don't know where they pulled all those daffodils from, but I know we didn't have that many in that part of the bed.....but who cares.  I'm surprised they put them back at all.

No doubt this is not what I wanted to spend a few grand on, but it is better than waterproofing the basement in a year or so - and you know it would come at the most inconvenient time to pump water out of there if it had happened.

So it's done.  Oddly enough, we're hoping for rain, just to see what happens.

It's also Kent State Day.  They are opening a new center telling the story of 1970. It's high time they didn't ignore it.

Song by:  Marianne Faithful
Posted by Blobby at 12:38 AM

"one of you knew her
and found her dead on the ground
how can you run when you know?"