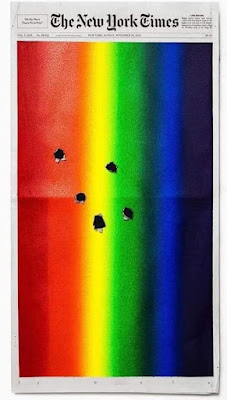 I would say I have 'no words' but I have plenty of them.

The problem is: I've said them all before. Multiple times.

It is easy to focus on the gay angle here. It's a hate crime. I get it. It is. But honestly, aren't they all?. Jews. Arabs, Gays. Blacks. Asians.Women.

You might not get the 'hate' label when you kill first graders, but you're not really winning any points there either.

In reality, school shootings are far more common than gay clubs. This isn't the way I want gay men to be more involved in gun control, but let's take a tragedy as a catalyst to some kind of solution.

Sorry - I laughed internally when I wrote that.

Not about the gays, but about the solution. One with a republican House. I mean, it's not like the Democrats did a fucking thing when they had the White House, the House AND the Senate, or even had a more even balance of SCOTUS.

No. There is no viable solution, because one will never get passed. I'm not even sure when will ever get proposed. The GOP won't - and the DNC can't. They cannot risk losing a single vote for anything, so they won't ruffle feathers and we let them not ruffle.

I somewhat get Dan Savages and others have tweet (are people still doing that?) that are anti-cop when it comes mass shootings and how gays brought down the shooter. And yes, there were many failings by law enforcement in many situations. But that's a very limited view to get a bunch of 'thumbs up' emojis.

I also think it's different being in a school, club, house, theater, synagogue when it happens versus being outside and not knowing exactly what's going on inside. Personally, I'm not BLOTUS, I wouldn't just run into the school like he said he would - assuming he could actually run. Doubtful anyone reading this would either.

And don't say, "but it's their job". Of course there is a possibility of death, but it's certainly not in the job description.

But if you were in any of those places, it's a run, hide fight situation. And that is exactly what happened. And I do think I could be part of any one of those, because let's face it, I'm fighting for my life. That it benefits others is almost a coincidence.

Yes, the GOP (DeSantis) has a role in this with their truly continual denouncement of gays and cultivating hate and dismissiveness, but no one is going to hold him to it. He's going to be the 2024 presumptive GOP nominee - so, we need to be prepared for that.

I believe: STRAIGHT WHITE MEN RULE! is his campaign slogan.

This would all be so exhausting if it weren't all so predictable.

I think Dan Savage writes more to shock, and to bring truth. After living through Pulse and watching Uvalde, very greatful to see a citizen step in , and the drag queen in heels.

The United States has a Gun problem.