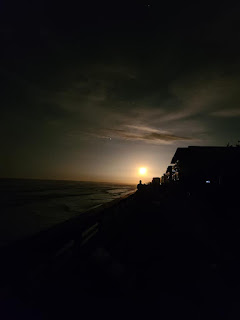 So, the Artemis rocket went into space - finally.

As I mentioned, my friend Kristen lives south of Cape Canaveral - and on the beach. She sees many a launch without leaving her back patio or the shore.

This launch was no different, except that it happened at 01:00.

While I'd love have seen that launch, I'd have been asleep hours before. Perhaps the rumble would have awoken me.

Even yesterday I overslept, which is almost never the case. And not by a little, but by about two hours. I mean, luckily I was on day two of jury duty, so my day started later than if I were going to work.

....and I got texted at 'the duty' because apparently I set up my blog to post at the wrong time.

Still, to see the most powerful rocket launch ever must have been something to hear, feel, see.

Honestly, I haven't read a lot about it, but I'm assuming since I've seen no headlines otherwise, that it didn't blow up (ooooh, they found Challenger debris in the Atlantic - like decades later) and I haven't heard of any snafus........so maybe all is good

This seems to be all NASA and no MUSK.  That makes me happy. I'd say it doesn't take a lot, but we all know that. is a big fat lie.

It will be wonderful if we return to the moon within my lifetime.

Have you gotten snow tracks for you shoes yet so you gave no slips or falls the winter?

I hope the Artermis is a success.