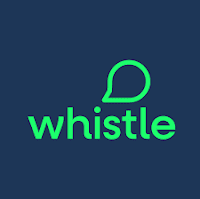 This ",...of the month' thing is a big fat lie.  It has been quite a while since I've downloaded an app, let alone reviewed one.
But as you know, hounds in general are flight risks. Shep is no exception.  I've written a few times how he's gotten out. Luckily, he hasn't gone far, but.......you just don't know.
Yeah, we got him an Apple Airtag, but it's limiting at best. 710 went on line, did a lot of research, as he is wont to do, and came up with Whistle.
It is a gizmo that clicks on to his collar and basically tracks him in multiple ways. It's part homing device and doggie fitbit. And it has a corresponding app.
With the app comes push notifications. For dogs who like to escape and run, this is a fairly important part of the gizmo. That only takes you so far, if you can't see stuff.
The images below are from different periods of time - like, when I remembered to take screen shots. There is little to no order in any of this

While the walk / map function is nice to track activity, it's also fairly vital if the dog is on the run. You can see the points where the 'beep' is tracked by the device.  It's every few minutes.  However, if he truly is on his own, you can set it to every 15 seconds.  Yeah, it wears the battery down, but you hopefully fnd them faster.
A blue light will also blink on the attachment to the collar. Better for night time finds. 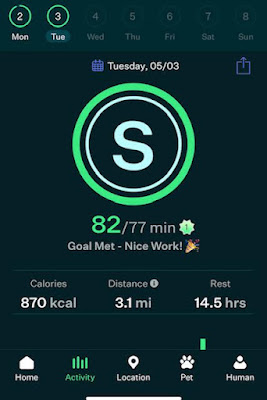 It tracks his activity level. And if he meets his goals.

It also tells you when he hits those goals and always sends me / us a reminder when he leaves home or gets back.
The one flaw is, it is attached to one human, per se.  It will say, "Shep left home with 710".  Which is great. It doesn't say that when I take him out.  It will say, "Shep is 600 ft from home", which can make one panic, if they didn't know I was walking him.
I'm on the account. It has my iPhone, so it should be able to say "....with Blobby", but it doesn't.
There are a lot of other features.  It will tell you if he is licking himself, resting, scratching - and if they are in "normal limits".

We haven't had to use it in an emergency, and we hope to never have to.  It has provided us piece of mind though. We are good about putting on that tracking device even when he goes out in the backyard just to pee.
You never know when someone might leave the gate open or some such nonsense.
Posted by Blobby at 12:07 AM

Open gate! Aaaarrgh! Will look for this if I adopt another hound. Fortunately the one time the gate was left open, the three beagles just walked around the house to the front door and barked to be let in. I was putting together their food in the morning and they figured that if any one of them broke ranks and took off there would be extra breakfast. The little guy who was a stray always figured that being regularly fed was worth putting up with the crazy humans.

Padlocks at my house only the yard man has a key

That's how they get you. First it is all about safety concerns, and the next thing you know Shep is seeing customized ads for squirrels and expensive squeaky toys everywhere he goes on the Internet.

Maybe the company will pivot and make a version that can be attached to employees? What employer doesn't want to know how long it takes them for their hirelings to pee, or when they are licking themselves.

Does Shep have a microchip ?

Shep is chipped, but that won't help find him, just identify him (and us) if someone finds him.