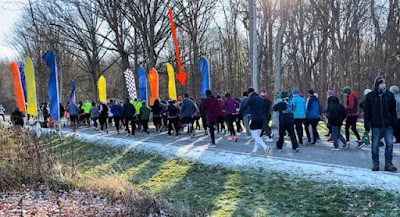 I can count on two fingers people I've mentioned this item of info. One being my husband, and not so oddly, he wasn't the first. Mystery keeps the marriage alive, no?
A few weeks back, after I was able to start running again, I bit a bullet and signed up for my first 5K. The next thing I did was text Morty to tell him.
For a quick recap - Morty is a bestie who has run about 172 marathons - at least one on every continent! -, a few Ironmans, a few triathalons - so he knows a thing or two about running. And no doubt I was looking for some validation in a safe space. And I got it.
It was only a week ago last Sunday that 710 knew about it. Then, only because, I chose the site of the race to walk the dog and he wondered why I selected that spot. So I told him. You'd think he'd have seen the charge for the race, but if he did, he didn't put 2 + 2 together.
There weren't a lot of runs left scheduled for 2022 and I was opting anything that wasn't "Turkey Trot" or "Reindeer / Santa" related. That, and the window was closing on decent weather.
As it turns out, that last part was a 100% pie-in-the-sky thought. I knew it would be chilly, as it is late November in Cleveland. I texted Morty this, and got his response. 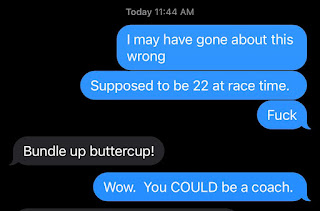 Honestly, it could have been something my cross country coach said - forty two !! years ago. But he made me laugh. He usually does. Morty that is, not my old coach (who is still alive!).
But it wasn't chilly.  It was cold. 19F, but felt like 9. If the wind wasn't blowing it wasn't going to be a huge problem.  Or so I thought.
We got 4" of snow the hours before I had to leave. Not a speck was cleared, so it took me longer to get where I was going. Of course, six miles from us was blue skies and dry roads. I made it with 15 minutes to spare - but I don't like that, as I was already anxious.
I was pretty geared up to run in the cold. The windproof gloves were a big fat lie, but my hands didn't feel cold until the turn, then they were just fucking painfully freezing.
Outdoor running is completely different than indoors. Besides the elements, you have to set the pace as opposed to the treadmill making you keep up. Outside I have no concept of time or pace. And I have no one set focal point, which is a problem and distraction for me.
The airhorn signaled our start and I started my very carefully cultivated playlist.
I didn't plan on two things:
1. My shorts. I peed right before the start. Except in my haste I forgot to tie said shorts. This wouldn't have really been a problem if the phone didn't weigh down the shorts.  It turns out, with gloves on, and at full pace, I can somehow tie my shorts without breaking stride.  Crisis averted. This might have been the more impressive thing I did all day.
2. The cold air and my lungs.
This last one was more problematic. The frigid temps made my asthma kick in at the turn. It's not that I can't breathe, but I cough. A lot. This made me take three breaks from running - though I walked. It was only for 20-30 seconds each time,  but I wasn't thrilled with the start - stop - start - stop cadence.
Even though I refuse to look at the control panel of a treadmill, I had an idea of how I was running and how long. Here? Not so much. I felt sluggish, I felt off my game. All of that said, I anticipated a longer run time than I was doing in training.   ....and that wasn't with factoring in the cold.
In my pea brain, I was thinking somewhere between 41-43 minutes. That was up from the 34-35 minute training time I had been doing. I even had a 45 minute playlist, just in case.
Before I rounded the corner to the last few hundred yards, I was telling myself, "well, this was a fun experiment,  but never ever again."   Then I was near the finish line and saw my time.
31:28.
I was thrilled. Honestly. I mean, I didn't show it or anything, mainly because I was still coughing, but internally I was questioning everything, especially all my misperceptions about my pace and my abilities.
Save once, I never neared that time in training. And that one time?  The day before my stress reaction.
I won nothing. Had I came in first in my age group, I'd have 'medaled', but I cam in fourth. This is not a brag. An 8 year old and an 80 year old got better times than myself.
Listen, I was happy to finish. That was my one and only goal. That I did better than expected was great. I love that 710 and Morty were texting my entire race. The downside is: I now feel I need to shoot for a 10K, but hopefully only when the weather gets better. This will give me a few months to train.
I'm making no promises.
Song by: Hembree
Posted by Blobby at 12:07 AM

Email ThisBlogThis!Share to TwitterShare to FacebookShare to Pinterest
Labels: Running

Congratulations on avoiding an embarrassing wardrobe malfunction. You are such a jock!

Congratulations! You finished standing up under your own power! Stick with the 5ks you will be under 30 before you know it. Maybe even catch up with the 80 year old.