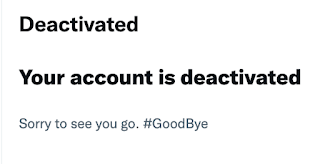 None of what you're about to read will shock you.

I do not believe they were indeed sorry to see me go, and fuck if they didn't get in one last hashtag.

From the beginning I was annoyed. I couldn't get the handle @Blobby.  I had to settle for @Blobby1. It was a disaster from the start.

Becky and her husband got me to join so many years ago, but truthfully, I never did much with it. I never know what to do with it. Or what I was supposed to do with it.

Yeah, I get 'trolling' and while I'm not proud of it, I did my share, especially if a person was the Senate Majority Leader,  a Beverly Leslie homo-not homo Senator from South Carolina, or anyone who shared BLOTUS' last name.

Oh - and Mitt Romney.  I got banned to 'reading status only'' due to my "inflammatory" words for him after he said they should wait to vote on RBG's replacement, then turned around and voted not to. Yes, I wished him and his family harm - and I stand by that - but I didn't threaten him. I mean, I also wish for $100,000,000, but they didn't ban me for that.

Twitter was just soul crushing anyways. The vitriol was making me seriously consider doubling my antidepressant, and the joke was, I never came to Twitter, it came to me. I'd get emails to check out someone's tweet - and like a moron / addict, I did.

I should have deleted it years ago, or at least after the 2020 election. But I didn't.

Musk made me do it.  He was my final straw.

Honestly, he did.  I hate to thank him for anything (so I won't), but the idea of that megalomaniac heading that (or any) platform was enough to make me find my settings and delete.

I am sorry I have a Space X t-shirt, though going to a launch was cool. His polluting the sky with hundreds of satellites is horrid.  Whenever I get an EV, it shan't be from his company.

Should I not be mistaken, I think I scrolled past a headline today (yesterday) that said he had dissolved the board and he and only he was in charge.

It's a matter of days before BLOTUS get reinstated, which will be fun to watch - except that I can't.  That means, BLOTUS' platform won't even be his go-to.  Yet another failed venture for the world's most failing "billionaire".   Shock. Gasp. Smelling Salts.

Granted, Twitter never took a lot of my time, but now it will take none of it, and I think that will do wonders for my mental health.

Congratulations! Welcome back to the world of the quasi sane.

To the contrary, I'll bet Elon is sobbing uncontrollably into his swimming pools of money because you left. Your departure might have shaved half a billion dollars off of Twitter's valuation.

You inspired me. I deactivated my account, too. Not that I ever used it much.