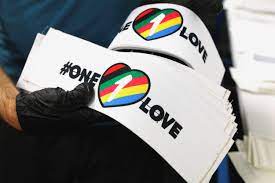 I know I have some international readers here, which means they might be legally obligated to like "football".......or as us Yanks insist on calling it, "soccer".
I liken soccer to be hockey without the ice.
As is usually the case, the Simpsons nail the difference between the U.S. and well, everywhere else, with a clip you can find here (which I won't embed).
But as you might know (not you Jon), the World Cup is currently going on.........in Qatar. The country being of Muslim reign has some questionable human rights standings. Better than some middle eastern countries, but still abysmal in many ways - including literally being whipped, three years imprisonment and up to and including put to death.
Those last two includes things such as homosexuality.
FIFA - the governing body of Football, the soccer kind - and the International Olympic committee HAVE got to do better at having countries host that don't continually violate human rights.
Yeah, I get it, there are no countries - the U.S. included - that don't have some egregious human rights violations, but I think these organizations could do a little better at having host countries not putting people to death for, you know, living.
It's easy for me to select the homo right, right?  I'm not a woman or an Apostate. Hell, in half of the places these committees select, being a Jew by blood alone - forget practicing - is a violation that is punishable.
And Qatar is all about the no 'mo issue. And FIFA, in their wisdom, have forbade players to criticize or protest in any way, as to not upset the host country.
Fuck. Them.
FIFA and Qatar.
Now there are One Love armbands that are showing up. FIFA is threatening to sanction its players and teams who wear a One Love band would get a 'yellow card' - which sounds like 'double secret probation - that could make them ineligible to play in future matches.
Germany, you know, who once killed millions of Jews (or at least allowed it to happen), are protesting the possible sanctions, by being photographed covering their mouths, showing the intent that they are being silenced.  Germany, has come a fuck of a long way in the past 70 years.
Seven European nations (England, the Netherlands, Belgium, Denmark, Germany, Switzerland and Wales) politicians who are in Qatar for the Cup are now wearing the armbands.  Good for them.
However, the same countries put out a joint statement to not wear the armbands so players would not be sanctioned and banned.  Bad for them.
Stand for what you fucking believe. It's a game. I get it's a business and so very visible for your country, but at what cost?
As some LGBTQ organizations have said, the arm band is nothing more than a token gesture. And it didn't make the dramatic statement they wanted to.
Fuck Pride in Football group too.
Oh, pretty please - tell me, tell us all, what you think is not 'token' and the actual dramatic statement you need / want / or think will change minds,
Clearly, FIFA, seven European nations and Qatar clearly think the arm bands are actually disruptive. It doesn't have to be two guys going at it near the goal. Items like this that chip away at the hate, the repression, the inhumane aspect of it all is valid and extremely important.
If the teams had balls - pun intended - they could withdraw from the Cup and make the statement.
I suppose that is the dramatic statement that pride group would be thinking.  I'd be for that as well. But in the meantime, let's do what we can, and take what we can get.
Song by: Bob Marley & the Wailers
Posted by Blobby at 12:07 AM

'Choosing' Qatar as host (through extensive bribery and corruption, one understands) was, of course, the initial hideous 'crime' which has given rise to all this brouhaha, and could otherwise so easily have been avoided - not to mention all those questionable deaths of migrant workers in constructing the several 'white elephant' football stadia. It's all become an ugly, though justifiable, distraction from the game itself and, this is what 2022 is arguably and sadly going to be remembered for.

Btw: I'm always mystified why in this particular tournament, non-U.K. countries don't kick up more of a stink that our country, uniquely as far as I can make out, is permitted to send FOUR teams (if they qualify through playing), one for each constituent part of the U.K. - England, Scotland, Wales and Northern Ireland - when Germany doesn't have a team from Bavaria, Italy not one from Tuscany......etc etc. I believe that the origin of this is our having independent football leagues for each geographical region - though this really doesn't wash as Wales' two biggest cities, Cardiff and Swansea, play in the ENGLISH league! Beats me! If I lived outside this country I'd be feeling mighty miffed too.

I am one of the Yanks with zero interest in the whole thing.