It was my friend Sal's birthday two days ago.  Time got a way from me and I missed reaching out to him, but I called him a day later - or yesterday, as it were.
I don't usually call many people on their birthday. My friend David gets one every year, but that is just to annoy him that I remember his birthday and he doesn't remember mine. It's tradition. Doug and myself are separated by only three days, so one of us initiates the call on his or my day.
Oddly, the close gang, we just don't. I mean, we talk weekly and text daily.
Still, Sal and I had not texted in weeks and hadn't talked for months - or more. He stumped me when he said "what's new?", because I didn't know when we last talked. I didn't want to bore him with shit I might have already told him - that is what Sunday Zoom Happy Hour is for with my besties.
We managed to update each other on our lives.
Part of it was our exercise routines - well, mine. Admittedly, he said he was doing nothing and should. I can't judge. I was that guy until this last March.  I showed him an image of my progress.
Oh - nothing salacious, though I suppose it is all relative. I had shorts on. But that is all I had on - plus underwear under the wear.
Did I get a: "hey looking good?"  or  "hey, you've lost weight" response?
No.  No I didn't.
I got this. 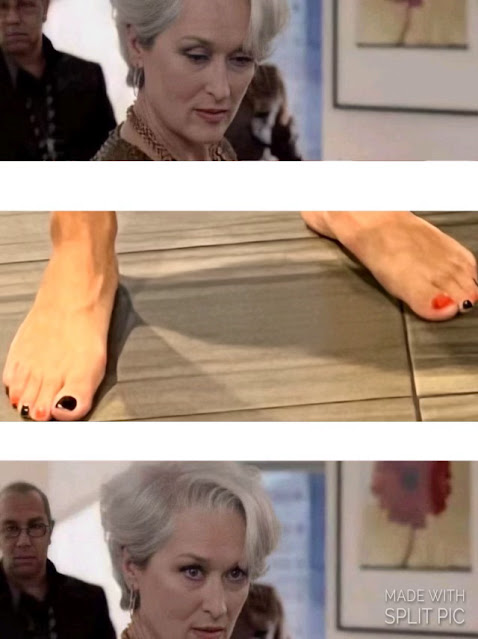 ....and he typed, "That's All".
I. Was. Dying.
In the original image, I can't believe anyone could even see my toe nails, let alone they're still sporting Halloween colours.  He claims it was the first thing he noticed. Actually, if he noticed anything else - the weight loss or toning - it was never mentioned.
Fetishes go all ways, I suppose. Feet are never going to be mine. And until yesterday, I didn't know they were Sal's.  I mean, I still don't know that.....for sure, but I'm now making assumptions.
Sometimes it doesn't take much to make my day, and this certainly helped.
Song by: Genesis
Posted by Blobby at 12:07 AM

Not my fetish either, but you have to admit they are nice feet.