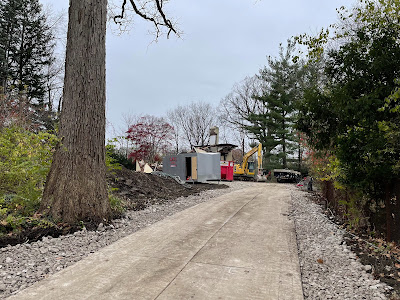 Two and one-half years later it came down.
Our old house, that is.
We moved about two and one-half years, ago, selling our own home shortly thereafter to a physician and his wife.
From the negotiations, we knew their plan:  tear down the residence to build a new / modern one in its place.
I totally get it.
That was one of our options as well. Spend a ton renovating what we had, and live in reno mode for 18 months; buy a new house; or tear down this and build something new. I won't lie - C. was a good option - save having to live somewhere else for a year and a half.
Clearly we didn't and we were happy to move one.
I've said before, I had no true affection for the house. It was a home, because we made it one, but it was a lot of work.  A lot!
We told no one of their plans. Other places had been replaced by new construction and the neighbors weren't thrilled with that. So when one of them told us, we could have gotten Independent Spirit Awards for our acting ability.
But that knowledge bomb was dropped a year and a half ago. And no movement anywhere.
Now and then we have to drive past the old hood and each time we'd say, "well, she's still standing".  Yet I can say that no longer.
A doc at work told me it was happening, as he lives a few houses down.  I called 710 and he went over to look. It is quick work with a bulldozer. What took months, if not longer, to construct probably came down in 90 minutes.
You can't tell, but our bedroom is still partially intact. It sits right before the remaining chimney. 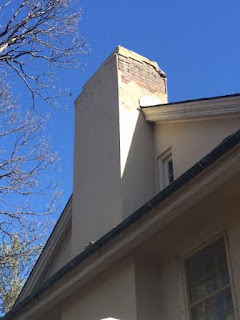 The chimney that was peeling cement. Repatching that there?  $11,000 !!!!!    So you could see the thought process on tearing it down to build something new.
As I had no affection for the house, I had always assumed I'd have no thoughts about it coming down. After being told about it, and seeing the pic, it felt weird.  I can't tell you what kind of weird, because I don't have that figured out and probably never will.
The era is gone. The house was 112 years old. Or 102, depending if you go by the census or the county records. One of them is off by 10. Between us and the previous owners, we had it for 41 of those years.
It's true: you can't go home again. Especially if it's not there.
Song by: Emmylou Harris.
Posted by Blobby at 12:07 AM

At first I thought you were claiming that YOU had owned it for 41 years, which seems chronologically impossible.

I have built a lot of houses, but never had one torn down, well except for the one we built in wrong place and was half finished before the surveyor noticed his error.