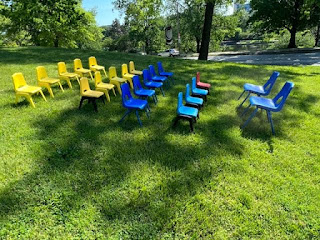 I'm still a little unnerved by Uvalde. I hope many are.
First off, I get the police weren't as good as they could have been. And you can train for anything, but theory and reality are not the same.
And it is my estimation that it is no one's job to sacrifice themselves to someone who can rattle off 150 rounds every 10 seconds. Rushing in would have been a suicide mission.
Yes, BLOTUS would have run in. He said as much after Parkland - but you know, he didn't tell the truth a lot of the time. Much like Greg Abbott.
Granted, that will now be the Abbott story. Not the guns. Not the access to guns. Not the lack of background or mental health checks. Not the - you can buy 10,000 rounds of ammo with nary a peep - but you go into a national database if you buy a single pack of pseudophed.
Nope - the pins are all in place to squarely place the blame on the police department. For the entire thing.
Driving around this last weekend, as we are apt to do every weekend, we came across church after church, synagogue after synagogue with 19 student chairs, and 2 adult chairs out on each of their respective lawns or parking lots. 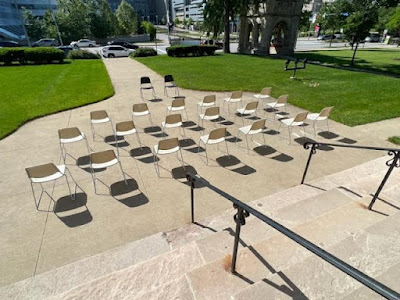 I stopped only twice of the 7-8 we ended up seeing, to take these images.
I am assuming through their own social media streams, many of these houses of worship got together to do this. It would have been too coincidental otherwise.
But this got me thinking too.  FFS, the GOP and "the church" are forever in a perpetual 69. Religion has such a sway in whatever the GOP wants to do, or that religion wants the GOP to do, that why the fuck are they not pushing some gun control?  ANY gun control.
But then I realized that it is really the GOP and the Evangelicals. They are "the church" of which we speak. Yes, they support Catholics when they want to deny Pappy Joe communion, but that's about where it ends. Jews?  Only if they want to support Israeli forces - but actual Jew stuff?  Noooooooooo.
And the Evangelicals already open carry in their churches, so there is no one taking up this cause. The ecumenical and unitarian factions - the liberal wing of religion, if you will - are the ones putting up these displays (and some reform Jews), but they hold no chance of change with the GOP.........or the Democrats for that matter.
BTW - FUCK Chuck Schumer.  He has stated there are ZERO plans to put forth legislation for any sort of gun control.  "Your vote for change matters this November" - or some such bullshit.
Dude - you're already losing the mid-terms in the House. The writing is on the wall. DO SOMETHING CONSTRUCTIVE you fucking piece of shit!
As much as I hate McConnell, he at least had his people in check. Schumer is a 'leader' in name only. It says 'majority' (for now), but he has no majority..........he barely has the minority.
Song by: Don McLean
Posted by Blobby at 12:07 AM