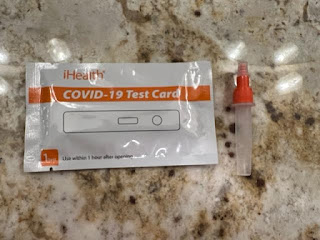 Honestly, 27 months in and I took my first Covid test.
Well.........second. The first was for a pre-op when I had my nose fixed a year and a half ago. This time, it was for possible exposure.
Ever vigilant, whilst in Chicago, we semi-let our guard down. Since we had almost never been out to eat in the last two years, we met my nephew for dinner and I wasn't thinking. They asked for proof of vaccination.
I didn't have my card. 710 did. But I hopped onto my electronic medical record and could show proof that way. I was cool. And we were eating outside, so we felt somewhat safe(r).
The next evening, we had dinner with my friend Doug and his husband. Everyone but said husband had been boosted x 2.  Erik has not met the age parameter to get the second booster - so good for Doug for landing a "younger" man.
I gave both a quick kiss upon arrival. 710 had never met Erik so they just exchanged greetings. We had a lovely evening (though the second worst pizza I have ever had in my life, and that includes the from the box Chef Boyardee shit). And we ate and socialized outside at their residence.
We ended the evening somewhat short, as they were flying to London the next day.
Cut to two days later, I get a text from the UK. Upon entry,  tested positive for Covid.
Fuck.  x 3.
I texted 710 to let him know. He took it better than expected. Doug and Erik felt terrible, but my take again was:  we've made it 27 months. I took it as a when, not if, situation.
But we tested when I got home. It wasn't great, but it wasn't horrible. I'm not a fan of things up my nose - boogers included.
15 minutes later.......... 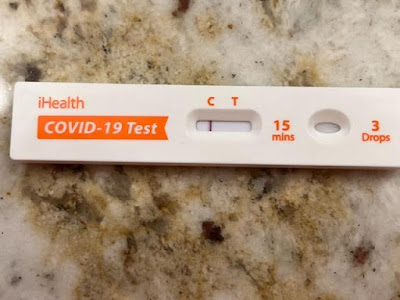 It says I'm negative, though they don't make it easy to read.
C vs T.  I suppose the FOUR PAGE  INSTRUCTIONS tell you what that means, but all I had to know was C does not = Covid.  It means it's negative.
710 was negative as well.
I texted Doug yesterday morning (the night before would have been rude, as it was the middle of the night in the UK).  He and Erik were very relieved they had not passed it along to us - as they Erik felt awful about the prospet.  I assured them ill feeling from something like that was never a concern.
Thanks to Pappy Joe, we used two of our free home tests.
Song by: Fall Out Boy
Posted by Blobby at 12:07 AM

Sometimes it is good for the test to be negative. My first test was in Iceland to return home.

Glad you’re ok. You can now order a third round of free tests but this time you get 8 tests.