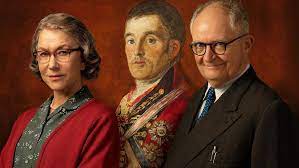 That is my one word review for the Duke.

Jim Broadbent and Helen Mirren - how bad could it be? I thought?  The on-line Insta trailers made it look lighthearted and funny - it seemed.

It wasn't bad. And it wasn't really lighthearted and / or funny.

It looks like it was semi-released in late 2020, but for general release, the studio et al tried to wait out Covid. It probably would have fared better just going to a streaming service.  While it waited its release, the director unexpectedly died.  It's not foreshadowing.............I think.

This is a mostly-true tale of a portrait of the Duke of Wellington that gets stolen from the National Gallery - the only known theft from the British Museum. It is done by a barely workingman who espouses Robin Hood references. He is a man of the people and for the people - which comes around at his trial.

The trial of Broadbent's character (well, the character he plays, not his 'character' per se) is the most humourous thing going here. While the rest isn't depressing, it plays a little bleak, but I suppose if you're a man of the people for the people, it should.

Broadbent's performance is good, I would say Mirren's is less so. It's ok and all, but halfway through there is a line inferring she is an Irish "girl". I didn't remember her sounding Irish before that comment, and not really after that line as well. Even after a foreseen transition in circumstances, she still is a frickin' crank.

Matthew Goode - who was also playing across the hall in Downton Abby: We're Making You Watch Us Again - was good as always. I have yet to see him in be fair or bad in any movie or television show which he touches.

I'd have to say - if you have to see it, wait a month or two, it'll be on Netflix or the like.