Lost in Music / Site of the Month 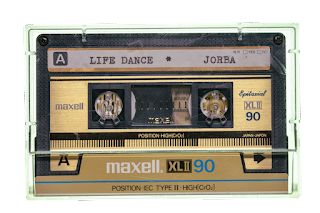 Mix tapes. We've all done them on a certain level. I had dozens for trips I took with friends and / or 710.
But in today's NYT Real Estate section. - yes, I read it yesterday - about a couple who bought a place on Fire Island (most of today's real estate section centers around Fire Island) and found crates of cassette tapes.
People who leave Fire Island only usually take what they can carry on the fairy. Apparently milk crates of Maxell tapes are not high on that list.
The article goes on to mention how the young(ish) couple didn't even have (or know of???) a cassette player. But were intrigued by the stash of the mixes with hand-written labels.
The tapes were from 1979-1999. As the article points out, "are the soundtrack to a critical juncture in gay history as the AIDS crisis emerged and a new generation of activists fought for their rights and survival."
That really hit me, and spoke to me.
Now, I was never big on much dance / disco music, but being a gay man of a certain age / era, it was impossible to avoid or ignore. And I married a man who loves/d disco music. So, really difficult to avoid. And to a degree, I engaged in it as well. Drinking. Drugs. Dancing......in that order, I might add.
Not long ago, a gay acquaintance and I were talking about gay music (really, music gay DJs play) and how it hasn't really come that far.  I mean, I don't go out and I don't hear a lot of new music, but I heard what he was saying. Clubs still more than snuck in songs at my time that were 15 years old........and 15 years later were still doing it.  They probably still are.
I don't know if the irony is they are doing it for people they don't know and artists they've only "heard" of, as those folks have moved on (or died), or is it honoring the history of the past men or artists themselves? I don't know the new artists and the songs I have heard has nothing new there - though to be fair, it's a small 'n' on my part. Autotune can only take you so far.
To the finders of these tapes, I'll give them this:  they found someone to digitize all of them and make the music available to all.  You can find them at The Pine Walk Collection.
Full disclosure:  I haven't listened to one of these yet, but I do believe I will.  Not all, but some.
You could and should read the NYT article here.
Song by: Sister Sledge
Posted by Blobby at 12:07 AM

Email ThisBlogThis!Share to TwitterShare to FacebookShare to Pinterest
Labels: AIDS, Gay, Music, Site of the Month

Time in a bottle!

I have a box of mix tapes. I hope to translate them to hearing form again.