My Body is a Cage 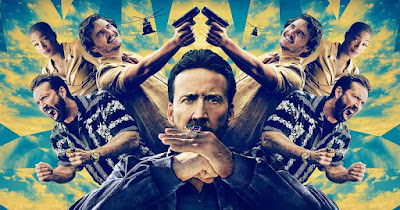 Cripes!  It's May and we've seen only three movies.  Tons of shit to watch on any of the streaming services and we've been sticking with the series stuff.

Yet, we had a late afternoon date yesterday and went to the movies. Turns out three other people decided to go as well. It wasn't a big turn-out, but that was ok with us.

There are a few films out there I wanted to see, but we selected the Unbearable Weight of Massive Talent.

I know, right?  Most of you haven't heard of it. I saw a clip in my IG feed and it seemed so weirdly out there, I wanted to see it.  I mentioned it a few weeks ago to friends Morty & Jon and they had the same enthusiasm I had for this.

Well, versions of him peppered with some of his known idiosyncrasies and his known personal problems. It's all very meta - and yet again, it's not.

What little I knew of the premise, 710 knew nothing of what we going to see.

I won't get into details or spoilers, but the writer and director reference any number of Cage movies from the past - some I hadn't even heard of.

As good as Cage is at playing himself, he is best when playing off his screen partner, Javi, played by Pedro Pascal. Personally, Javi is the heart of the film, but the premise of a movie star in a movie about making movies keeps up the meta theme.

There are few laugh out loud moments, but they start to come later in the film, but there are humourous moments throughout the movie. The set-up for the movie takes a while, but it turns out to be necessary. That Cage is in on the "joke" makes it that much better.

I would say we both enjoyed it quite a bit.

I don’t like mr cage
So I will skip it

Did they make any John Malkovich jokes?

John - I don't either, so it made it that much more interesting. Oddly, no Malkovich jokes.

I don't think I've seen any movies this year at least in the cinema, so you are way ahead of me.