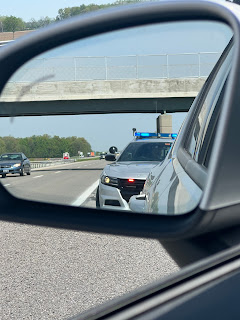 Still, 87 mph is fast. Even on a turnpike. Even a mostly empty one (at the time).

So when the construction ended, Blobby opened up that throttle and took off.

710 uses Waze and I'd say 95% of the time, the other Wazers have notified us of police who are near. Not so this time.

G-d love him, the patrol guy probably heard my expletive even with my windows up. He had to see the brake lights. And he started to even pull out before I passed him. THAT is how fast I was going.

I suppose I could have said I had to poop, but I had just passed a rest area. I just copped to say: "I wasn't really paying attention".  He ran what he needed to and came back with my ticket and fine.

All of this did not put a damper on our weekend in Chicago.  But 710 drove the last hour of our trip.

Song by: the Go-Go's

And you are man enough to say opps!

I never care about the fine. I just don’t like points on my license. In my state that would buy three points , with 12 making a suspended license. Police are always where they least need to be and never where they could be .

That was a good description. I would give it a 97 or 98.
Missing detail:
Was the "very kind and courteous" Trooper Brigham cute?