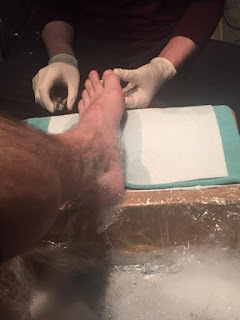 Yesterday, I went and did what I normally would have called a self-indulgent thing. Now, I'd just call it a necessity.

I've talked about getting a pedicure for eons, but never actually went through with the deed.

I know people who are actually turned-on by feet, and who am I to judge?  It certainly isn't my thing, but each his own. Or hers, I suppose.

I know people who are incredibly disgusted by feet and think sandals should be outlawed. I'm not one of these people either.

That said, in recent years, while I still wore my Birkenstocks, deep down I hoped no one would look down at my piggies.

With all that knowledge in hand, on a whim - well, a sort of whim - I checked Yelp and found a well rated, yet not pricey, place that specializes in pedicures for men.

The thing with Yelp is, they give the reviews and will say "it was worth the price", but not what said price might be. But I was willing to place crowbar firmly in wallet on this one. I was committed.

I walked in and they said they take walk-ins. I'd hope so, as it seemed I was the only one in the place.

True to semi-stereotypical form, all workers were Korean or Amerasian. The semi part is: they were all male. I wasn't expecting that, even in a spa for men. Two were very handsome, none of those two were the person working on me.  Such is my life.

I said seemingly I was the only one there. During my time - which was not unsubstantial - two guys came out behind closed doors where I saw massage tables. Me?  I sat in a high-backed massage chair with a tub to soak my feet.

The guy alternated between my feet - with only gloves and mask to protect him. I would have expected a full hazmat suit.....and wouldn't have been offended had they pulled one out.  He did the clipping, then the cuticles, then he worked on my stubborn calloused heels. Then I got the foot and leg massage.

Oddly, save one brief moment, I wasn't ticklish at all. One of the cute guys saw me squirm and chuckled at me. Cute guys have done worse to me, so I was ok with it.  But with the massage on the left foot, he hit my fascia.

I was just telling 710 a few days prior, since our deductible is all paid down for 2017, after our summer vacation, I might have the surgery on one foot to ease the pain. In 2018 I'll have the other foot done.  I'm tired of waking up and dreading my feet touching the floor for that first a.m. walk and the pain that comes with it. I can no longer bike or Spin due to the discomfort.  It's time.

Since this is my first pedicure, I have no idea how long the effects will last. All I can say is I couldn't be happier with the results. But this will now be incorporated into some kind of routine. I'll definitely get another before we head to Maine in July.  Sandals will be involved.......along with some judging homos.

I'd give you an 'after' shot of my tootsies, but it would mean little without the 'before'............and not only am I not ever showing you that view, I was never ever ever going to even take a shot of that. I learned my lesson from my wart days.


Of course, me being me, I sat there for that hour (?) and had stray thoughts from the movie, Sisters. This is one of the highlights in 2015-2016 film history.

Song by: Karen Savoca
Posted by Blobby at 12:07 AM

spouse and spouse's BFF get pedis all the time. it's one of those little luxuries just for yourself. spouse's pedi lasts about 2 months.

After I had my spine fixed two years ago, I couldn't bend down to reach my feet, I went and had my first pedicure. Oh how wonderful! I am glad to hear you enjoyed it.

Well I ain't never had one but with your enthusiastic endorsement, I might just have to consider such extravagance.

You're going to ME?!

I received a gift card for a nail salon and decided to try a pedicure. I'm more ticklish than you apparently, so it was difficult for me to endure the whole thing. I returned to clipping my own nails again. I only used 1/2 the value of the gift card so I gave it to someone else I thought would enjoy it. Sounds like you're a "believer" now!