Power to the Meek 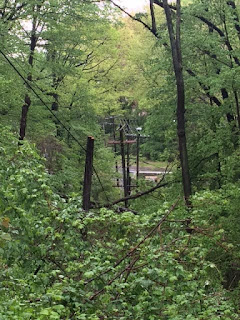 It was a crapshoot if you were going to get a blog post today.

I mean, you would have, but it wasn't known if it would be on time.

That power outage I mentioned oh so briefly yesterday continued throughout most of yesterday as well. Naturally, our temps outside hovered around 42 F, so that was no fun - considering we had no head inside.

And it was pouring outside.

Well, we had some heat, as I the fireplace going.....and a dog who was ok with laying on top of me. It wasn't a three dog night, but it was a one dog late morning.

I would have gone to Starbucks to get power and free wifi so I could post. As it was, in the morning I went to one so I could do some work budget stuff, but didn't assume it would take so long to get power back.

The thing is - I should have figured that. As we lost power on Monday and Tuesday. Semi-high winds, a saturated ground and old trees are just a recipe for disaster. Trees come down and take nearby wires with them.

BTW - none of this was on our property.

Down the street there is a holler, if you will, that has bunches of old trees....and slopes.....and well, precariously place power lines. What could possibly go wrong?

Apparently this week: a lot.

I found myself annoyed for lots of reasons. There was the power thing, sure. There was the sitting in the dark thing - no way to charge a phone to even play Words with Friends. But it was more the draining of said phone battery checking on the status of the repair.  Or the non-status.

Every 90 minutes, the site would say it would be fixed in two hours. They just changed the delivery time. Or that they semi-fixed the line (brown-out status) and took it off the site as being 'fixed'.

Natch - the neighbors all called or emailed me. I suppose running the neighborhood email directory, they think I'm some fountain of knowledge {and in some ways, I am}, but I have no inner workings of the electric company  - unless it's the one with Rita Moreno and Morgan Freeman {sp.  it.   spit!}

One woman actually got annoyed with me when I didn't know the answer of when a fix would be in place. Her daughter literally rolled her eyes at me. Cunt Sr. and Jr.

Ruckiry (not Jon's boss), late yesterday afternoon, before thinking of heading to Starbucks to post, partial power came back on - enough to charge a phone. Then full power. And so far we are four hours in with no service interruption........though the electric company site says there are still outages in our 'hood, though I don't know where.

It wasn't all bad. I slept. Quite a bit. Friday night, with the house all dark by 20:00, I was asleep in a chair 30 minutes later......and up in bed by 22:00. And then a good nap after doing my work at the coffee shop. I don't normally get a lot of sleep, and rarely nap, so semi-forced napping seemed ok to do on a cold, rainy, powerless day.  Days.  Plural.

Clearly, I'm not designed for roughing it. Red Roof Inn is my idea of the lowest standard to which I can exist.  But on the plus side - they allow dogs to stay, usually for free.

Song by: the Eurythmics
Posted by Blobby at 12:03 AM

Your neighbours got annoyed with YOU when you didn't know the answer? What a bloody cheek!
JP

It does all sound annoying, yes.
I am with you on the Red Roof Inn notion.