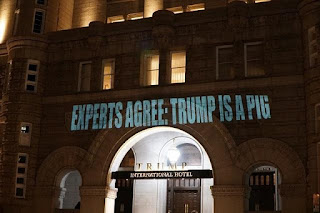 So Comey - the man the Democrats assumed screwed the pooch with his ill-timed announcement about Hillary. As it turns out - he's an equal opportunity pooch screwer......so that's the silver lining, I suppose.

Yes, I totally get you're all tired of coming hear to read my shit on this, but I look at it as a sliver of documentation of history........not that anyone will be around to read it after the inevitable nuclear annihilation.

Seems Comey's FBI training did him good. He was smart enough to document everything. Allegedly, the former director created memos for every phone call and meeting he had with SCROTUS. Including trying to influence an investigation into Michael Flynn........allegedly {though we all know it is true, even though Dump's lackeys say it's not}.

I don't believe for a nanosecond that Dump understands, let alone abides by, the separation of powers in this country.

There's a lot he doesn't understand......I'm assuming.  My absolute fave was him asking Comey to consider putting reporters in prison for publishing classified information.

Why isn't Alanis writing a sequel to her 1995 hit. She's got nothing else going on.

Dump though is stupid too.......besides just being arrogant and borderline. Comey's note-taking was a well known thing in DC.  I guess that's the price Dump pays for being "an outsider".  Comey did it in the Bush administration to great effect, and during other investigations where those notes held up in court.

And he covered his bases, giving copies of these memos to FBI folks and outside associates. There is no way for others to cover or bury that.  CYA. And he gave the notes to them real time.....so there is a trail back at least to February. Had they all shown up at once, I agree, he'd have a credibility problem.

So far, the republican leadership is silent. I don't mean SCROTUS. He's never silent.......nor is he a leader.

I almost feel bad for some of the GOPers. Can you imagine having to pseudo-pretend to support this guy publicly and behind closed doors trying to figure out how to operate day-to-day without completely imploding the party?

They made their own bed.  You know the rest.

Oh - and I love the guy parks across from the Dump DC Hotel and projects images onto it. It's not vandalism. I can't say he's truly breaking any laws unless he's not putting change in the meters.

Song by: Metallica
Posted by Blobby at 12:03 AM

This reader is not in the least 'tired' of it, B. It's the story that just keeps on giving, day after day. If it wasn't so sorry and damaging to millions, as well as scary, it surely does provide entertainment value in its sheer madness.

"the republican leadership" - an oxymoron; rethuglicans ARE morons!

continue to speak out and fuck those that don't agree. silence = acceptance. AND WE WILL NOT BE SILENT!

The GOP has a Tribal mentality where they will all stick togtehr and bury their heads in the sand up until the story might personally affect their chances of staying in office; and then they'll abandon _____ like fleas off a rat.