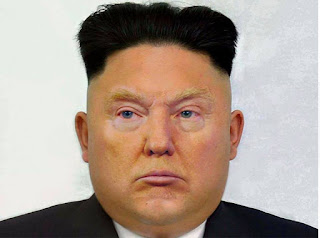 SCROTUS loves nukes. He has said so. A few times.

Let's face it - he only needs an excuse to punch in the nuclear codes.

While I think North Korea and Kim Jong Un is bat-shit crazy, he is less so than Dump. The hair is just as bad, just a different style......and colour. Possibly.  Only their hairdresser knows for sure.

This cannot be coincidence.

But to cite two pivotal movies in history, we only need to discuss War Games and Austin Powers. I mean, for this scenario, this is what it comes down to, no?

Yes, we dropped the first two nuclear bombs. People were so shocked and horrified that it ended the Eastern Theater of WWII. But by the time the Cold War rolled around and escalated, and just about anyone and everyone had the means to build and use one, the question was: to what end?

In Austin Powers, Dr. Evil uses a highjacked nuke to hold the world ransom for $100 Billion. And the world immediately caves. My question - to whom do you return a stolen bomb to once you get the payment?

I guess the bigger question is - if one is so scared of someone else using one, so they use it first, isn't that the definition of flawed logic?

For either Dump or Un the question is moot.........or 'mute' as one of my friends would say {and not in a funny Malaprop way}. They are off-kilter enough to not care, or not understand the consequences.

The fucking last thing I want to do is be amongst hundreds of millions of corpses, that then just become a factory of centuries of disease. Vaporize me immediately please.

So in my own way, I'm trying to enjoy life as it is, because with these two, who the fuck knows. It could be over before any of us realize it might happen.

The War Games reference? Well it's an easy one.

As the WOPR would so prophetically say in its Steven Hawking-like voice: "the only winning move is not to play."


If only Un and SCROTUS were half as smart as the stupid IT guy who tried to unplug the WOPR.

Song by: Sigue Sigue Sputnik
Posted by Blobby at 12:04 AM

That should be our mantra: The only winning move is not to play.