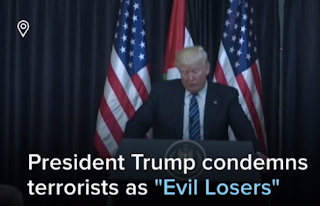 Well, there is one thing on which SCROTUS and I can agree: the terrorists are losers.

I just don't understand why dozens, or hundreds or more have to die.

SCROTUS said he had a "secret plan" to defeat ISIS in 30 days.

A quick glance at my calendar will tell me he's been in office for 123 days.

What exactly is he waiting for ????

People are dying on his watch because he won't reveal, let alone enact, his "secret plan".


A broken campaign promise??  Say it isn't so!!!!  Isn't that why some of you morons voted for this guy?

Of course, he also campaigned on not touching Social Security, Medicare or Medicaid?  How's that all turning out for you stupid fucks in the red states who are "welching off the system"?

Your idea of a better healthcare system just got shot to shit......assuming this budget passes. Any hospital that accepts Medicare and Medicaid patients  (which is all) will be slashing their own budgets. They'll be doing less with less.  That means those needing care - including your sorry Dump voting asses - will get less and less.  And it will take longer to get.

Lesser Medicaid = more Self Pay, which = No Pay.

Hospitals and doctor's offices don't run on charity. Rent isn't free. Labor isn't volunteer work. Equipment isn't donated.  For those who didn't think healthcare is a right, you win.........and yet you're about to lose.....big time.

No worries though, there are huge tax cuts coming.......if you're wealthy.

This one I don't get.  Why would Dump need big tax cuts when he's not paying any at all??


Song by: Orchestral Maneuvers in the Dark
Posted by Blobby at 12:03 AM

It completely flummoxes me that he STILL gets so much support. Those already wealthy I can just about understand - selfishness rules! It would be the height of snooty arrogance for a Brit to criticise Americans en bloc, but if there was an English equivalent of this individual (and we may yet get one!) I'd consider those carrying on giving him/her their support in spite of his/her stances and behaviour little short of demented.

"evil losers" - it takes one to know one, right, dump?

I manage a behavior health/substance abuse/primary health care clinic. We serve 3,000 people a year. Where will they go if Dumpcare passes? Because we will be closing.